CBCB in the 60s: Ernie Burch 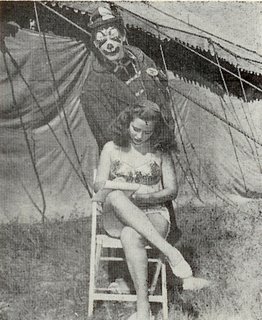 Was Ernie "Blinko" Burch a member of the Clyde Beatty-Cole Bros. Alley between his long stint on Ringling and his equally long run at Circus-Circus in Las Vegas? It's hard for me to say for sure.

But the 1962 program contains this picture of Ernie, who may have been a member of their Alley in an era when it featured other ex-Ringling clowns such as Emmett Kelly, Harry Dann, Albert White and Jimmy Armstrong and would soon add Lou Nagy and Dennis Stevens.
Posted by Pat Cashin at 8/16/2006 05:02:00 AM

There's also a terriffic story about "Flo" and "Blinko" when they did the washer gag also. There was a time when news would spread through the backyard that "something" was gonna be a little differant tonight, When even the most jaded folks on the show would make a point of peaking through the back door to watch the antics! "Let them be clowns"....