For those who still can't tell them apart, or don't know that there is a marked difference between them, today we look at Emmett Kelly and Emmett Kelly Jr. 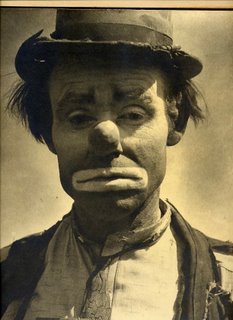 Emmett Kelly was born December 9, 1898 in Sedan, Kansas, and began his career as a trapeze artist. In 1923, Emmett Kelly was working his trapeze act with John Robinson's circus when he met and married Eva Moore, another circus trapeze artist. They later performed together as the "Aerial Kellys" with Emmett still performing occasionally as a whiteface clown.

He began working as a clown full-time in 1931, and it was only after years of attempting to persuade the management that he was able to switch from a whiteface clown to his now-famous tramp character.

That character, "Weary Willie", was a clown who, rather than go for the laugh, instead appealed to the sympathy of his audience.

His approach was revolutionary for it's time: traditionally, circus clowns wore whiteface and performed elaborate slapstick stunts intended to make people laugh. Kelly (and, more importantly, his versatile mentor on the Cole Brothers Circus, Otto Griebling) helped to usher in an entirely new rhythm and style of circus comedy.

From 1942-1956 Kelly performed with the Ringling Bros and Barnum & Bailey Circus, where he was a major attraction. He left after the AGVA strike of 1956 and spent the next two seasons in New York City performing as the mascot for the Brooklyn Dodgers baseball team. He continued to appear as a celebrity attraction on spot dates, with Shrine Circuses and in nightclubs for the remainder of his career. He also appeared on Broadway, on television and in film roles.

Emmett Kelly Sr. died at the age of 80 of a heart attack on March 28, 1979, at his home in Sarasota, Florida. He is buried in the Rest Haven Memorial Park, in Lafayette, Indiana. 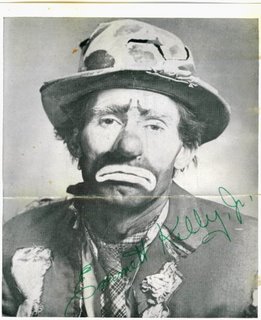 Emmett Jr. is a United States Navy veteran and former auto mechanic who successfully traded on his father's celebrity to carve out a career for himself by appropriating his father's likeness and his most famous routines.

He is best known as the subject of a long running series of collectible figurines that give the impression that he enjoyed a long and distinguished circus career.

It was the Sarasota Show Folks New Year's Party dancing into 1971. I was a real raw and absolutely knocked out kid sprouting out of the 3rd year of Clown College onto the Ringling rehearsals and my first brush with circus royalty, drunks and legends. I knew I was at the right party when Dougy Ashton rocked the crowd with his comedy knockabout Stripper routine, backed by a band. Eric Braun, my newfound Florida surfer boy Alley mate introduced me to his Uncle Karl Wallenda, and I sat with them for visit...but the most memorable part, besides feeling deep down inside that I fit with these people, was bringing in the New Year splitting several Falstaff's with Emmett Kelly. I thought I had died and gone to heaven. After that, I knew I had found a home.

Incidentally, Emmett Sr., while alive, I understand took a 40 per cent commission off the top of what Jr. made, for using his name.
I don't believe they were none too close....that's ashame.
bb

1977 or there abouts. My new publicity photos gets me an interview with the legendary NYC theatrical agent, Rose Adair. During the interview she gives me the third degree regarding my clown routines, she is very precise and I go through every routine, step by step. She picks up the phone and calls Leonard Green, Emmett Jr's manager, and secures a booking for me on a brief summer tour of the Emmett Kelly, Jr All-Star Circus.
She negotiates the BIGGEST contract I've ever had to that point in my show business career. I was afraid they were going to ask for a partial refund.
Opening town is Cohasset Massachusetts at the Cohasset Music Circus summer theater. A theater-in-the-round with a canvas top overhead; a wonderful facility.
The circus is doing the matinee shows for children and families and there is a big broadway show playing in the evening.
Upon arrival I start to unload my stuff into the dressing room; the place is packed because there are two shows playing there that week. I meet Emmett, Jr. for the first time in the hallway talking to a very attractive lady with an English accent.
Emmett,Jr. was soft-spoken, laid-back and very easy to work with. I get my dressing room assignment and was told that we can watch the big stage show that night, just show my backstage pass and sit in the folding chairs near the sound board.
The circus folk mingle with the theater folk and I'm not sure if the English lady is with the circus or the stage show. She is very friendly, a true pro.
That evening I take my seat next to the sound board, the show starts, it's theater-in-the-round so the actors/actresses make their entrances/exits via the sloped aisle.
In the darkness of the back of the theater a stage assistant shines a flashlight on the floor so that nice English lady can make her way to the aisle right next to where I am sitting.
She slowly walks down the aisle and while in the darkness she shouts her first line: "Sing out, Louise!" Then the spotlights pick her up and the audience sees Angela Lansbury for the first time. She is Mama Rose and the show is Gypsy.

A few weeks later, Gypsy played the Westchester Theater and I brought several family members to the show and to say hello to Miss Angela Lansbury, who was gratious and polite and almost as excited to meet my family as they were excited to meet her.

Also on the circus were the Antar Wazzan Family, Carmen Hall and Charley Van Buskirk.

At the time my best clown gag was a soap routine called, "The Michelangelo Paint Co." Since the stages of the Emmett Kelly, Jr. show could not accommodate all the props, the sharp and swifty agent, Miss Rose Adair called us "Pat and Mike". When the lovely Miss Angela Lansbury saw our name on the dressing room door she asked if we were indeed Irish, I'm first generation Irish-American and spent many summers in Ireland. Her mother was Irish and her father was English and she had a home in Ireland, so we had a nice chat about "the old country".
"Pat" was Pat Bissonette; he and he wife, Mary, were circus fans in the metro NY area and he was a very good semi-pro clown. He was retired from his regular job and whenever I could book him I'd bring him along, he got such a kick out of playing "the big time" as he called.
After the first day, Emmett, Jr. asked if he could join in the clown gags. He was very polite and appreciative that we could work him into the routine. He normally would do the feather on the nose bit and meander around the stage while the other acts worked.
I was very new to the business and was unaware of the controversy between Sr. and Jr.

This gives me another opportunity to comment on a European clown whose image appeared in an earlier posting.
On 5 June, there appear photos of Emmett Kelly Sr, and one Pinocchio, taken on Bertram Mills Circus here in England in 1939, shortly before the outbreak of war. It is suggested that Pinocchio was Spanish.
having asked around, it turns out that he was not Spanish, but Italian. Arturo Biagioni, born in Florence, Italy in 1880. Described as a nice, gentle clown doing run-ins on Mills. He didn't have a good war. Died around 1949.

Note to Pat.
I shall start to feed through various comments and information on other European clowns who have appeared in these pages soon. As in "before I start getting busy in the lead up to Christmas etc!"

John,
Your info on European clowns is fascinating. I didn't realize that the Fratellini daughter was married to Carlie C.
Many European clowns appeared on the Ed Sullivan TV show, which was a major influence on me as a youngster. In NYC we also had Don Ameche's International Showtime, I believe it was on Friday evenings.
One of the acts I saw on TV AND eventually worked with was The Grimaldis, who tragically were killed in an auto accident here in the states a few years ago.
A few years ago I was called in to do substitute ringmastering for my good friend, Ian Garden, Jr. on his Canadian tour where I had the pleasure of working with RENALDO who is currently on ZIPPO'S in England.
It's a small world to begin with but show business makes it even smaller.

Pleased to be of service, Mr. Naughton, Sir!!
I know that Charlie Cairoli did 2 or 3 Ed Sullivan Shows, and ceratinly did 1 New York cabaret date.
Believe it or not, I have plenty to tell about the man, and I shall send Pat some material in due course. My first "article" has just been sent down the line, so maybe that will appear soon.
I have ceratinly seen Renaldo on Zippo's. Smooth work. Nice guy.

All that stuff about stealing somebodys face is just that: Stuff.
emmett kelly junior is a nice man. His father was a bore. Good clown,but BOring. I wouldn't put my father's makeup on. Takes some pride/guts. I have to hand it to Emmett Jr.