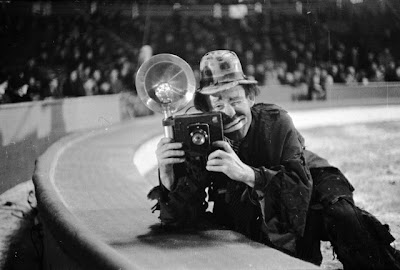 I recently discovered this picture, maybe my favorite of Emmett, taken at what I believe would be the Bertram Mills Circus.

That is my guess because the Cole Bros. Circus where Emmett worked in the late 1930s didn't play any indoor dates (to the best of my knowledge) other than the New York Hippodrome, and that ain't the Hippodrome.

Emmett appeared with Bertram Mills in 1938 and 39 and, I understand, would have been invited to return were it not for the war.

The Paul Jung Troupe had been invited to join the Betram Mills Circus in 1938 as well but, unfortunately, had to back out. It would have been very interesting indeed to see how European and American clowning would have developed had the continent had the opportunity to see Jung's slam-bang Bob Clampett/Tex Avery cartoon-style clowning and had this master 3-ring producing clown returned to the States flush with ideas gleaned from watching and learning from his more classical European counterparts.