LAKE GEORGE - Gracie Hanneford made a career as a circus performer, like her family did for generations, before moving to Lake George in the 1950s.

Before her death in 2006, she wanted to create a scholarship in memory of her father, Edwin "Poodles" Hanneford IV, a seventh-generation circus performer.

So she contacted Rosemarie Earl, a guidance counselor at Lake George High School. She told Earl her will would include a donation to provide Lake George students with scholarships, but she never mentioned the amount.

It was not until a few years later, after Hanneford died and her assets were sold, that the Lake George Scholarship Association learned the gift was more than $900,000, the bulk of Gracie Hanneford's estate.
"When I got the letter from the attorney, I was flabbergasted," said Jim Mathis, president of the association, which doles out scholarships to Lake George students and graduates each year. 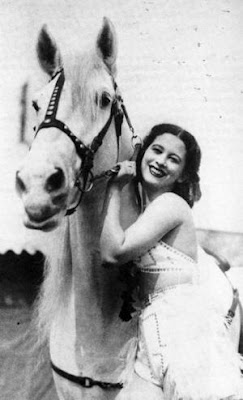 Earl, who is also on the association board, said families will sometimes donate money to honor someone. A $1,000 gift is a common amount, and she originally thought Gracie Hanneford's donation would be around $1,000.

"I thought it was wonderful," Earl said, of the bequest. "It's going to be there, really, forever. If we give away the interest of that money, the principle will always be there."

Hanneford put stipulations on the money.

Known as the Poodles Hanneford Scholarship for the Performing Arts, awards will be given to qualifying students who intend to study subjects such as theater, film, television, radio, music, literature, screenwriting, journalism and circus arts.

Lake George graduates now enrolled at a college can apply, too. Students can continue receiving the scholarship if they show they are still studying the written or performing arts.

Gracie Hanneford never attended Lake George schools. She came to the area with her family in 1956, after a career as a horseback rider in her family's circus act, an act that was part of several top circus shows in the early to mid-1900s.

After moving to a home on the east side of Lake George, her family set up a dog act at Frontier Town, the former theme park in North Hudson.

Later, Hanneford moved to California for a time but eventually returned to Lake George.

She served on the altar guild and was a vestry member at St. James Episcopal Church, and she was part of the Glens Falls Hospital ladies auxiliary, according to her Dec. 20, 2006 obituary.

He was known as Poodles the Riding Fool, a clown who set a world record by making 26 consecutive running leaps on and off a horse, according to a press release from the association.

Poodles was inducted into the Clown Hall of Fame in 1965. He died two years later.

Now his name will carry on for years as the scholarship helps students pay for college.

The association received a portion of the endowment from Gracie Hanneford last year and used it to give two scholarships of at least $1,000 each, Mathis said.

Mathis said the association could give out as much as $20,000 from the Hanneford fund this year. Students have until next week to apply.

The Hanneford fund is the largest at Lake George High School. The association raises money each year for scholarships and hands out other awards through other bequests.

The Hanneford endowment is among the largest recent bequests to local schools for scholarships.

At the Hadley-Luzerne High School, officials two years ago were shocked to receive $1 million from the late Alice Harris, a former student who later owned a grocery store in Lake Luzerne and often loaned money to students so they could pay for college.
The Harris fund provides scholarships to students who cannot afford college.

Other local high schools have numerous scholarships created by area groups or businesses, along with those made in memory of others.

Some scholarships are given to students who study a particular subject.

Queensbury High School once received $50,000 from Sarah McEchron, a Queensbury teacher when the district was made up of one-room schoolhouses.

Only the interest from the McEchron bequest can be used, with the money going to students who pursue teaching careers, said Kathy Fisch, Queensbury's director of guidance.
High schools like Granville, Hudson Falls and Saratoga Springs have similar scholarships, but none from bequests as large as the Hanneford fund.

Peg Earl, the mother-in-law of Rosemarie Earl and a friend of Gracie Hanneford, knew Gracie was interested in the performing arts and wanted to honor her father's legacy. But Peg never imagined her endowment would approach $1 million.

"She wanted to keep her father's image alive as long as she could. To tell you the truth, I couldn't believe the amount myself," she said.

While Peg Earl said she could only assume that most of the endowment came from the sale of Gracie Hanneford's home, Gracie was a frugal person.

"She was one of those people who never bought a new car. She always bought a used car," Peg Earl said.