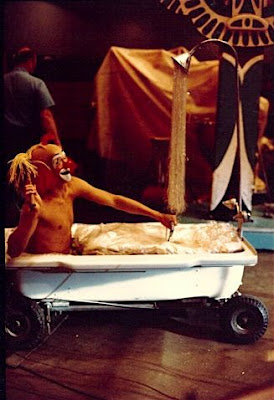 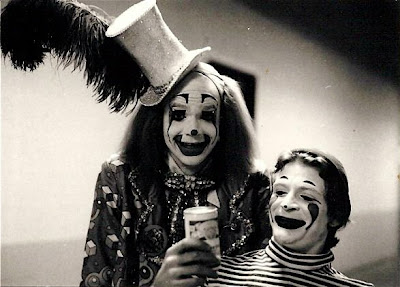 More whitefaces in one photo than there currently are
on all three Ringling units, Dale Longmire and Ron Jarvis 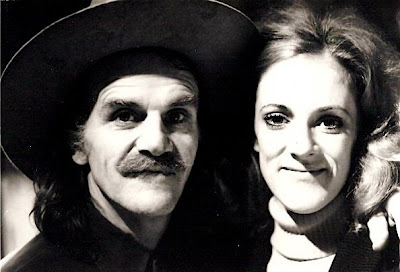 Mr. Dougie Ashton and his gal Sal
(Dougie, if you are out there, call Lazlo! He'd love to hear from you!!!) 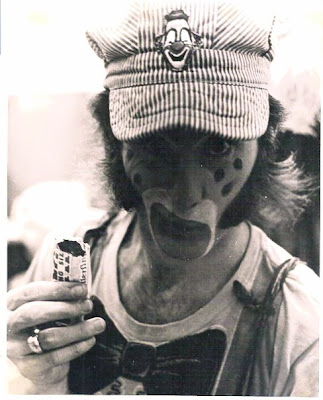 Billy Baker wearing the same Lou Jacobs patch on his hat
that I moved from shirt to shirt throughout my childhood. 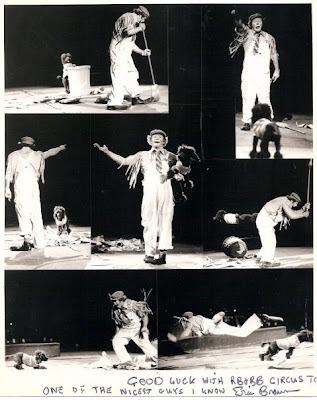 The late Eric Braun with Shoopee

I had a really nice online chat with Mark tonight. He's got some amazing pictures from his time at Clown College and on the road.

Anyone aspiring to be a whiteface clown would do well to study the makeups of Dale Longmire and Ron Jarvis (among others). I've always admired people that can do a whiteface makeup well (I think partly because I never could and had to settle for the Auguste that I came to know and love). In addition, Dale creates some of the most stunning wardrobe I've ever seen...always a riot of color that to me simply screams "circus". I've heard that Don Foote always liked to create production costumes for those tall strutters like Dale, Richard Mann and Richard Fick and Dale has carried that style on in his own wardrobe over the years. In fact, I often think that he has more color and sequins in a single costume than you'll find on an entire modern day Ringling show!

Just a guess...
the top photo of Mark and the bathtub is a "posed" shot, the bathtub is not moving as can be seen by the motionless "water" streamers.
If the bathtub was moving the water streamers would be flapping in the air.
When they do a tv series called CSI CIRCUS, I want to help them write the script.

I became a whiteface by default. Mark and I were a team and it was hard to tell us apart from a distance if we both wore Auguste makeups. Same height and hair, but I did have a bigger..... ego, and if you ever wonder how I got my rock hard abs it was from pushing that damn bathtub around every arena in the country! How many of you remember a clown dressed as an Indian pushing Lou in his bathtub? That was always me or Mark.

BTW - Shoepee got his name because he used to pee in Eric's clown shoes when he was a pup. Damn smart dog too.

Thanks for the compliment Barry... I liked my face because it was simple and I could show a lot of different emotions (stupid and REALLY stupid)... it worked for me.

Barry,
Thank you for the very nice comment, its nice to be remembered and respected for your love of the art. Mark Buthman was an amasing photographer and Im sure he has tons of memorible shots from those days, I have one of his shots of Bruce Gutilla and myself with a great inscription. Ron... was that your Bud or mine ?

Hi Dale... Regarding the Budweiser the phrase "FINDERS KEEPERS" come to mind! It probably WAS your beer but possesion is 9/10ths of the law in most states...