This press release was received this morning concerning Electric Lemon Records inexplicable re-release of the musical misgivings of Johann Sebastian Bork...
For those of you who happen to be fans of J.S. Bork (personally, his charisma escapes me entirely), you might be semi-nonchalant to learn his 1978 near-hit album MUSICAL MENOPAUSE will be Internationally re-released in download form EVERYWHERE starting Monday, June 22. 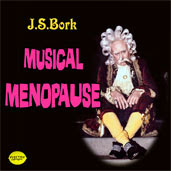 Among other things, this is the album - you may recall - which features the Moron Tabernacle Closet Choir in "He Shouldn't Teach The World To Sing". Also included is the studio version of "Is That All There Is?", "At The Home", "Liebestraum & Tubastraum", "Golden Years", "Chopin's Mayonnaise", "The Bork Shuffle", "Mother Trucker" (a Chuck Barris de-composition), and two new tracks of Herr Bork's never heard until now: "Mystic Bork" and "The Hay Fever Two-Step", which comes with two Kleenex tissues and a bottle of sinus decongestant.
All-in-all, quite a listening experience, with the definitive Bork sound provided by his Kreeblemyer Stompers. It's an Electric Lemon Download Production, and you just might want to download it. Or not.

For a stumble down Memory Speedbump, return with us now to those thrilling days of yesteryear when Bork made his first appearance in this country on The Gong Show, introducing Chuckie Baby:

For those unfamiliar with the work of Herr Bork I strongly encourage you to visit iTunes immediately and download both available albums.