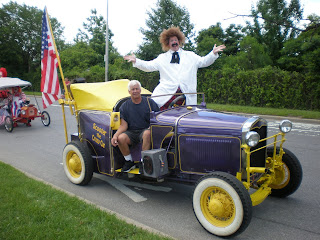 Jerry Hunsberger and I lined up before the start of the 99th annual Fourth of July parade in the Travis section of Staten Island on Saturday for Vince "Vappo" Pagliano's Funny Factory Productions. This one was notable for the fact that it was the first time we performed the act as "The Professor" for a parade.
The Professor has worked the act at a few racetracks and classic car shows but, as much as we've planned it, we haven't performed the act that way for a parade and we weren't sure that it would go over as well as my usual auguste look.

We needn't have worried. They bought the character immediately and the act went over like gangbusters. I'm very happy to report that we were a big hit with the huge crowds all along the parade route.

Thanks go out to Vince and his crew for a great time!