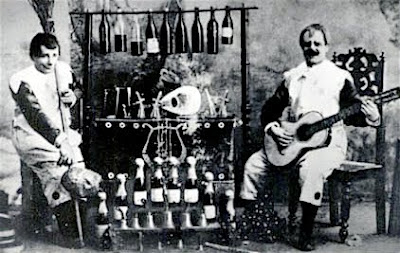 Bim Bom was a Moscow Circus clown duo consisting of Ivan Radunsky (Bim) and various "Boms" along the years.

Their clown act was enormously popular, but often banned or censored due to its politically critical humor. Each act would begin with an original song and dance performed by Bim. Radunsky had been a member of the Bolshevik Party, and were pledged members of the futurist movement early on. But after the 1917 revolution the duo turned their wit against the new power.

Bim and Bom desisted from mocking the Bolsheviks only when their couplets so offended Latvian Riflemen in the audience that they shot up the circus and threatened to do the same to the clowns.