STEVE & RYAN: Nothing But Nonsense Fundraiser

Steve Copeland and Ryan Combs are in the final weekend of their Indiegogo fundraiser to produce their show "Nothing But Nonsense".

They are two of the best working clowns anywhere right now and are supremely worthy, and would be extremely grateful, for your very generous support... 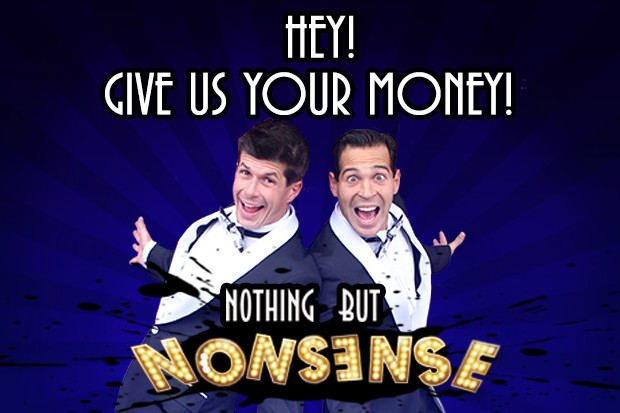 "Hold the phone and hide the good China!
Steve and Ryan, the Sultans of Slapstick, present their new show, Nothing But Nonsense, a hilarious cavalcade of singing, dancing and visual gags that has people everywhere asking, “Who hired these two?!”
Mirroring the lives of Steve & Ryan, Nothing But Nonsense is a raucous romp filled with music, magic, and other underwhelming achievements that will have you laughing so hard rubber chickens will shoot out your nose!
Come and get in on the act with Nothing But Nonsense, an exciting extravaganza of pure entertainment that you’ll never forget….no matter how hard you try. "
We are Steve Copeland and Ryan Combs, and our passion is making people laugh. We have spent the past thirteen years touring the United States and abroad doing exactly that.
It has been our dream for many years to bring our unique brand of entertainment to people all over the world with our own show.
Nothing But Nonsense is that show. Your contribution will make our dream come true, and we can continue doing what we do best: making people of all ages roar with laughter.
P.S- We did not win the $1.6 billion Powerball drawing, so this campaign is our Plan B!

Since we have spent the majority of our careers as circus clowns, we are not exactly rolling in dough!
We are raising funds to purchase the following:
Posted by Pat Cashin at 2/12/2016 12:43:00 PM