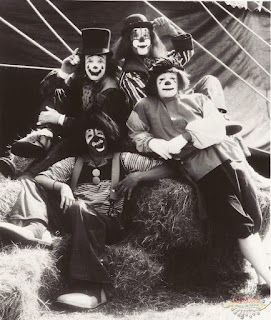 Robert Grissetti, David Gerard, Geoff Cobb, and Thomas Caguin, four of the 1987 Beatty Cole clowns.
Robert, Geoff, and Thomas were all fresh out of the Clown College class of 1986.
David had spent a year on the Ringling Red Unit after graduating from Clown College in 1980, and later worked for Clyde Beatty and other shows.