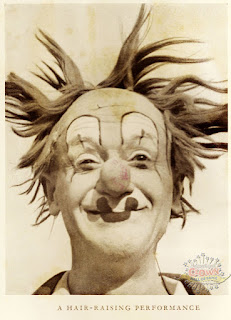 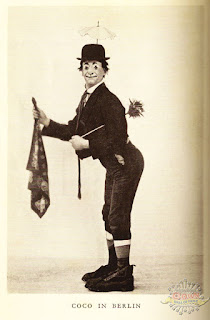 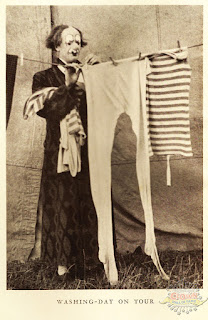 From Wikipedia: Nicolai Poliakoff OBE (2 October 1900 – 25 September 1974; Latvian: Nikolajs Poļakovs; Russian: Nikolai Petrovich Polyakov) was the creator of Coco the Clown, arguably the most famous clown in the UK during the middle decades of the 20th century.

Nicolai Poliakoff was born in 1900 to a Jewish family in Dvinsk (today Daugavpils), Latvia which was then part of the Russian Empire. His family were poor and worked at the local theatre to supplement the money his father earned as a cobbler. When his father was conscripted to the army in the Russo-Japanese War the five year-old Nicolai started singing for food to avoid starvation.[1]

Poliakoff was appointed an honorary member of the Association of Jewish Ex-Servicemen and Women[5]. In 1963 he was appointed an Officer of the Most Excellent Order of the British Empire (OBE) for this work by Queen Elizabeth II, one of the few foreigners ever to receive this honour.

His eldest son, Michael, a longtime circus "Producing Clown", creator of a much imitated "soap gag" entree, and the Clown who designed the post 1960's Ronald McDonald[6], was by then already using the "Coco" moniker. Michael had made his debut in the ring at 17, as "Coconut" and his sister Helen as "Cocotina" ('cocos' being the Spanish word for grinning face and applied to the coconut because of the three marks on its shell).[7] Michael's Coco the Clown was inducted into the International Clown Hall of Fame in 1991.

As well as Michael, Poliakoff had five other children with wife Valentina: Helen, Nadia, Sascha, Olga, and Tamara. Tamara was the founder, along with her husband Ali Hassani, of the first circus in the UK not to use performing animals.