The extremely talented artist, Elena Zaïka, has had two of her paintings chosen to be used as celebratory stamps for the Monaco Principality. The first is of the well known Russian clown, Yuri Nikulin. 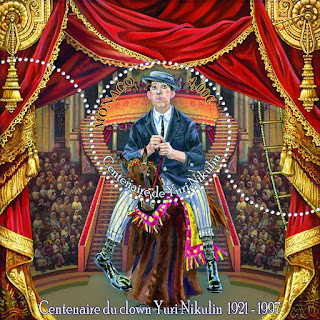 Born in Demidov in 1921, Yuri Nikulin is Russia's most famous clown. Demobilized in May 1946, with the rank of sergeant and several military decorations, he failed to enter several acting schools. He finally joined Clowns in the Moscow training studio graduating from 1950. He will work there for more than 50 years and from 1982 until his death in 1997 will be the Director of this circus which is named after it today. He also has a film career and offers remarkable performances both in Leonid Ga ddai comedies including Le Bras de Diamond (1969), a film that became cult for generations of Soviet people, and in the dramatic register like When Trees were Big ( 1962) by Andrei Roublev. TV man, he created and hosted the comedy show The White Parrot Club. His natural style, precision of his prestions and sense of timing have made Nikulin an outstanding artist whom some consider to be the best Russian actor of all time.