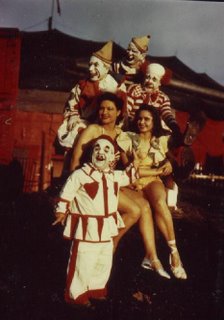 Pile up gang! It's Picture Day from back before Clown College, when the auguste came to rule the Ringling Alley.

I'm not sure of the name of the guy at the top (I know that he was used on the cover of the Ringling program one year so he's probably someone for whom I haven't connected the name and the face yet) but I know that right below him are Jackie LeClaire's father Jack LeClair (they spelled their last names differently) on the left and Milt Taylor on the right, two lovely young women and Frankie Saluto at the bottom.

Frankie's makeup is slightly altered in this photo from his usual makeup at the time. Jack LeClair's makeup is different too.

There are several photos (all from about the same time, possibly the same day) of Jack LeClair with this makeup he wearing here, one that differs GREATLY from his earlier makeup. Why would a clown with such a great, expressive face and such a simple yet effective makeup suddenly change it at this point in his career?

I've been told that "back in the day" Ringling management would ask some clowns to come up with an alternate makeup for some press photos to make it seem like there were more clowns on the show than there actually were.

That's why we have strange photos of Lou Jacobs, Gijon Polidor and Felix Adler all in a very similar makeup (the most famous photo of which is a close up of Felix shouting with his hand to his mouth, which was used for years on posters and publicity materials and is the logo for the Felix Adler tent of the CFA) over the years. That's why we have photos of Paul Jerome in whiteface in the 40s. That is why there are whiteface photos of Otto Griebling on the Cole show.

So maybe THAT explains the change in Frankie Saluto and Jack LeClair's makeups.

Rules were far more relaxed for the clowns on the Ringling show back then and they were free to experiment and try different things.
Posted by Pat Cashin at 9/16/2006 07:43:00 AM

Hi Patrick,
In an email regarding the picture, Jackie LeClaire said that "Dukie Anderson is the clown on top in the back."
Robin

What a beautiful sight to see all the clowns in white again, brings back the aroma of sawdust and warm circus days...