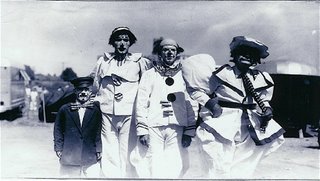 From 1902 until 1907 he appeared in vaudeville as a trick bicycle rider. In 1908 he joined the Ringling Bros. Circus and subsequently worked on the Walter L. Main, Morris & Rowe, Gentry, Bailey Bros, and Hagenbeck Wallace circuses.

He was a prolific Producing Clown specializing in several trick automobile gags. He may have invented the "second driver" car that seems to drive by itself, the kind used by the Wiswell and Cook families for many years. He also created an early version of the bathtub that Lou Jacobs made famous. There is also strong evidence that he created that absolute all-time classic of three ring American circus clowning, the Firehouse Gag.

Because there are more photos from the Last Supper than there are of Buck Baker, I'm using my meager detective skills to deduce that he is the clown on the far right with his face (frustratingly) obscured by his hat.

This photo is from the Pfening Archives. Fred has this photo ID'ed as "BAKER, BUCK WITH CLOWNS" and has neatly typed "BAILEY BROS. CIRCUS (HARLEY SADLER) WITCHITA FALLS TEXAS 9/11/35) " under it. Included with it is Buck's obituary from his local newspaper so it's on good authority that I'm accepting that Buck is one of the four clowns in the photo.

Now, Buck Baker wasn't a "little person" so that eliminates the man on the far left, He could be either of the two gentlemen in the center of the photo but Buck would be about 62 years old when this photo was taken in 1935 and neither of those men look old enough to be 42 much less 62.

Therefore, if this is a photo with the elusive Mr. Buck Baker in it, it's my guess that he's the cat in the hat.

If anybody out there has a better photo of Buck, PLEASE let me know!

According to Earl Shipley in a Billborad article dated November 29,1952, he states that Jim Rutherford originated the clown firehouse.

He also states that Bickle & Watson (?) originated the clown band,, Abe Aronsen did the rabbit/dog hunting gag before Charlie Bell or Lou Jacobs.

I have several pix of Buck Baker. Let me see if I can get them to you. My great-uncle Hank Peare worked with Buck at Ringling. In Clown College in 1979 I showed all my uncle's photos to Lou and I remember him saying "Christ! That's Buck Baker!" you can reach me at gary@ukulelia.com