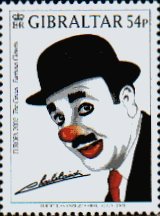 Where to begin? What to leave out?

I suppose the start is obvious.

Whilst he was born in Italy, his parents were both
French, and it was their only visit to that country.
Charlie made his ring debut at the age of 7, and by
1929 he was working at Cirque Medrano in Paris,
France, in an act with his father (Jean-Marie) as
white-face, and the celebrated auguste, Porto. By this
time, Charlie was known as Carletto. The Cairolis were
to remain at Medrano until 1937, Charlie's elder
brother, Filip, replacing Porto along the way.

For much of that time, the other major Parisian circus
building (Cirque d'Hiver) featured Les Fratellini.
Naturally there was professional rivalry (and respect)
between the two star clown trios, and each sent family
members to the other building to spy on their
competitors.

Charlie would notice the frequent presence of one
particular charming young lady in his audience, so
made sure he met her. He discovered that her name was
Violette. Violette Fratellini. Her father was Paul.
The result was marriage (despite some initial
opposition from both families) and, subsequently, 3
children (2 daughters and a son).

The year 1939 found the Cairolis at Blackpool Tower
Circus, where they were very successful. Filip
returned to France when war broke out, but father and
younger son stayed on in Britain, often billed as The
Cairoli Brothers when working in variety when the
circus wasn't operating. Having been born in Italy,
Charlie was interned towards the start of hostilities,
but eventually he would perform 2 shows each day - and
then spend the night working in a munitions factory.

Charlie Cairoli remained a fixture a The Tower until
his retirement at the end of the 1979 season, a season
during which his health had not been good.

Featured prominently, there would often be a brilliant
stooge called Jimmy Buchanan. Jimmy worked absolutely
straight-faced. Dead pan. Even whilst his nose or ears
were severely tweaked - and with a mouth full of
water.

Violette Cairoli and Jimmy Buchanan have both departed
this life.

However, Charlie Junior still works as a clown,
although he took some time out from circus, and
dropped the "Junior" a while ago. Of late, he's been
in and out of hospital, so is resting as I write. He
and his wife Claudi (more formally Claudette) have 2
sons - Charles and Alexander - who have little or no
interest in show business.

I know that a grandchild of Filip Cairoli was living
in the US some 10 years ago.

That tells you something about the man and his
colleagues. In due course, I'll tell you something
about his work.

The stamp Pat has used as illustration was from a set of 4, the basic artwork being provided by Clowns International (of which I'm a past Chairman). The year in which they were issued was officially a European Year of the Circus as far as postal authorities were concerned.

You know of any good footage of Charlie & co. out there? I've got a nice film clip of Charlie and his dad from a 1930's or 40's Britsh movie. I've also got a few of his appearences on Ed Sullivan and such. I've also seen some brief 8mm circus fan-type clips of him in the ring at Blackpool. Max Butler found me a very clever & funny clip of Charlie doing the Queen Bee entree from a Pathe newsreel in the 50's. Anyone come across anymore Charlie footage (or his TV show from the early 70's) across the big pond?

I have a clip of Charlie plus Jimmy, Paul Conner and "Junior" at Cirque d'Hiver in 1973 (according to Junior) in a recording of La Piste aux Etoiles.
There's been a whole seried of "La Piste" issued on DVD fairly recently. I shall have to investigate next time I'm in Paris.
I'm guessing, Greg, but would the clip of Charlie and Dad include some eccentric dancing from Charlie? And the laughter is fairly obviously dubbed on?
John.

Yes, that is the clip I have, definatly from some British film, poor audience dubbed-in laughter, but great eccentric dance moves by Charlie.

I also dug around and found the Birthday entree from a Swedish Chipperfield TV special hosted by Robert Morely, as well as a very late clip from another English TV show, and you can see Charlie is in poor health and his timing is way off.

The clip with Charlie and father would have to be from the 1940's as they didn't arrive in Britain until 1939. I believe the star of the movie was Gracie Fields (what do you mean, Who? !). I'll ask around and try to find the name of it.
Meanwhile, Greg, I've e-mailed Toto and asked him to let you have my contact details. Maybe you'd like to do the same thing.

After reading your article concerning Charlie Cairoli, I wanted to give you a small update about Filip Cairoli. He immigrated to South America around second world war. He immigrated to Bresil first and then moved up around. He had a circus for many years called CAIROLI WHITE. He decided to retire in Montreal, Canada where his older dauther was already living. I gad the chance to leave with him for many years, he left us at the age of 90 years. He was a great clown and an excellent man. We do miss him a lot.