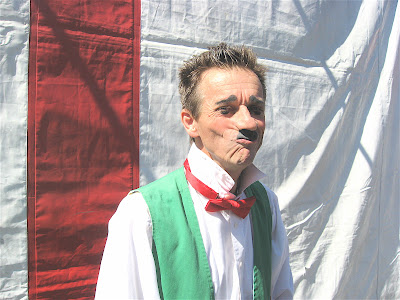 Johnny's father worked concessions for Ringling, where Johnny helped out. While working with his father he continually managed to sneak away to watch the clowns and eventually attended Ringling Bros. and Barnum & Bailey Clown College, class of 1970. He started the Muttville Comix a few years later.

Click the title of this post to see them wowing the crowd at the Just For Laughs festival.

(Is Johnny using the Jaco Pastorius song "The Chicken"?!? Why is Johnny Peers using MY new "come-in" music???)

I'm the one who sent you the photo of Johnny (taken at the Big E Fair Super Circus in West Springfield, MA, recently). I talked with Johnny a few minutes ago and he says he's been using "Ain't Nobody Here But Us Chickens" since 1986, when he appeared for the summer at Park Safari in Canada. Johnny keeps adopting replacements for the mutts he's retiring along the way--he first started using dogs when he was boss clown on Circus Vargas in 1973. He still loves developing come-in gags more than anything else. Johnny Peers has been "with it" since graduating from the second Ringling Clown College, class of '69.
Lane Talburt

I've added a photo credit; things are a little disorganized since China.

I just discovered the live version of Jaco Pastorius' "Soul Intro/The Chicken" and thought that it was the perfect "come-in" music for next season.

I was so proud of myself for finding such non-traditional clown music that seemed to fit the bill so well.

Imagine my suprise when I saw this clip of Johnny using the same, fairly obscure, song!