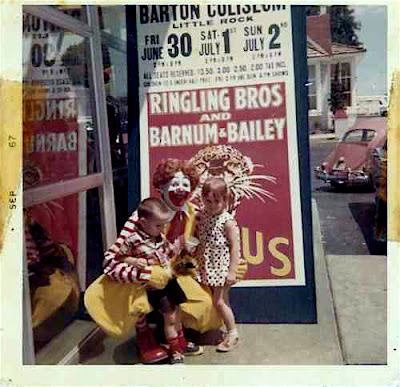 Michael "Coco" Polakovs was hired in the mid-1960s by McDonalds to revamp their Ronald McDonald character, originally developed and portrayed by Willard Scott. It has long been rumored that Mike also played Ronald in the first few national commercials featuring the new-look Ronald. 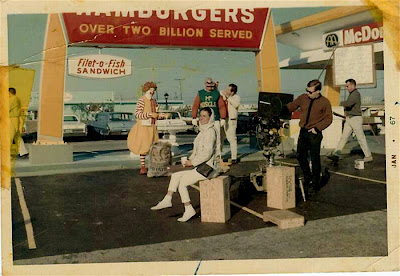 I have also heard that the "Mr. Muscle" character pictured here was played a Ringling clown. Other early characters were played in the commercials by veteran clowns Bobby Kay and Albert White.

These photos were sent to me by Mr. Piccard from the personal collection of Mike Coco's son, Graham.

Mr. Muscle was played by Duane "Uncle Soapy" Thorpe. In his personal scrapbooks were many beautiful 8x10's of he and Coco in full make-up & costume for these commercials. Mike Coco sold off the design rights to this look for very little money.

Hi Pat! I'm interested in using another photo of Coco from your blog, but I'm having trouble finding a way other than these comments to reach you! Is there any way I can get in touch?

You, or any other member of the family, is certainly welcome to any of the photos posted here.

I have an autographed picture of Coco that my son got when he was very young.
He is loved by all in our small town in Kentucky.