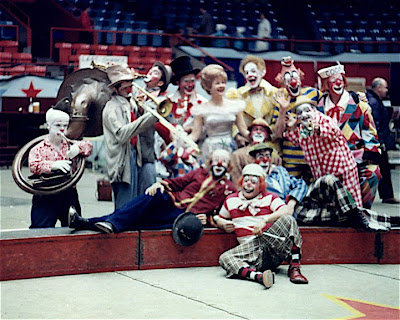 Before the Greatest Clown Alley on Earth was split in two:
Down front: Marcos Drougett
On the ring curb: Mark Anthony, Lazlo Donnert, Frankie Saluto
That looks like a Dewsberry there at the far left. I'm not sure of who's who until we get to Dale Evans and then we have Prof. Paul Wenzel with Miguel "Mike" Padilla in front, Lou Jacobs in his waterskiing outfit and Mike "Coco" Polikovs in his great "harlequin" suit.
If you look closely behind the trombone you'll see Prince Paul Alpert.
Conspicuously absent: Duane Thorpe, Kinko Sunberry, Bobby Kaye, Michael Karp, Dougie Ashton, and Otto Griebling.

Geoff and June Dewsberry we not on Ringling I don't know that little clown at all.

Lou is wearing his old-time bathing suit for the WATER SKIING behind the mini motorized boat.

Roy and Dale hosted the HIGHLIGHT OF THE GREATEST SHOW ON EARTH --- you have a clip of them next to COCO holding the barrel/dummy shock chord.

I have tried the barrel/dummy shock chord bit on some Shrine dates --- and it didn't work. Bernie Kallman figured it out in a second. The "Flight of the Dummy" is only effective if you have all white spot lights on the dummy to pinpoint the audience's attention to the "flying dummy". Thank you Prof. Kallman.

Geoff Dewsberry was on Ringling...very briefly in the late 60's. Around the same time as Bumpsey Anthony. The little guy with the tuba looks like John Cooper, another late 60's addition to clown alley.

I second that it looks like John "Jackie" Cooper. Also missing is Gene Lewis and Dennis Stevens.

Greg, I knew June but I never met Geoff, I believe they were imported to the US by the MIlls Brothers.

Dennis Stevens should have been here, too.

That photo looks like it could've been taken in the Greensboro Coliseum. I recognize the building features.... but I could be wrong as there were probably several arenas with those types of seats etc. ... but the coloring of the seats.... and railings makes me wonder.
Anyone out there remember the photo of the entire alley in the mid 60's that may have been taken about the same time... maybe the same place...... on the top of the ramp leading on to the arena floor? The Coliseum was fairly new when it was taken... it had the original "arched roof."
This photo I'm talking about hung in the office near the backdoor and it was always a treat to view it. It disappeared after one of the latest coliseum renovations. I would love to see it again!
JD

great photo! Maybe it was taken in Greensboro???
JD

The girl is Dale Evans, and yes, that TV special was filmed in Greensboro, NC, as were a few others from that late 60's era. They didn't start using the "beautiful Bayfront Center in St. Petersburg, Florida!" till around 1970 or 71. The first Gunther special in 1969 was filmed in Balitmore, MD.

cool! Greg, do you remember seeing that photo of the Alley on the ramp?
JD

Also, Paul Wenzel had heart surgery (or some sort of procedure) in Greensboro in the 60's.
Anyone have an idea what year that might have been? I think it was "pre Red/Blue."
JD

Here's a link to the G'boro paper that lists the Roy Rogers Dale Evans Cicrus special on Feb 14 1966.
http://www.news-record.com/content/2008/02/17/article/heroes_stars_athletes_greensboro_has_welcomed_them_all

Not long after that....1967... I saw Jimi Hendrix open for the Monkees in the G'boro Coliseum.
http://www.youtube.com/watch?v=Oms2593gXPM

That was a historical tour... and FUNNY! What an odd mix.

I have the newspaper clipping of Paul Wenzel getting treated in Greensboro. I think it may be one of the few pictures of him out of make-up I've ever seen. Coco used to say that Wenzel would have frequent heart problems and they would have to remove his false teeth before they'd take him to the hospital. He also said Paul lived on a houseboat in Tampa Bay during the off-season.

I auditioned for Clown College at the Greensboro Coliseum back in Feb. 1988. I was in "regular" college at the time, and I skipped all my classes that day to attend the audition. It was a 2 and a half hour drive each way for me. After the audition, I hung out in the Coliseum and befriended a couple of the clowns. I was able to hide backstage until showtime, and then sneaked up into the nosebleed section of the seats to watch the show for free. That was a very magical day for me!