“Banana Shpeel” grew out of a desire of Cirque founder Guy Laliberte’s to create a vaudeville show. It comes to the Chicago Theatre on Dec. 2. (Scott Strazzante/Tribune photo) 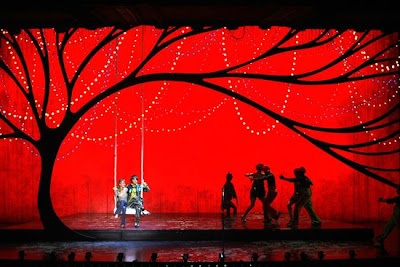 From “Ka” to “Kooza” and “Alegria” to “Zumanity,” the Cirque du Soleil has conquered tents, casinos, theme parks and arenas in almost every corner of the world. It has achieved total dominance of the high-stakes world of Las Vegas entertainment. It has wrestled with the music of the Beatles and the infamous personality of Criss Angel. Come January in Vegas, it will even take on the biggest entertainment icon of them all: Elvis.

But even as it has cut its extraordinary swath through global culture over the past quarter century, Cirque has assiduously stayed away from one huge segment of the live entertainment industry.

Cirque has ignored these mostly historic, occasionally iconic jewels that pepper American downtowns, make up the chain of Broadway and, in the case of the beloved Chicago Theatre, emotionally embody a night on the town.

It is a gap Cirque’s derivative competitors have shrewdly exploited, creating an endless array of Euro-style, animal-free shows such as “Cirque Dreams,” “Cirque Ingenieux,” “Cirque Imagination” and (coming to Skokie beginning Nov. 28) “Cirque Le Masque.”
But with the arrival of Cirque du Soleil’s new “Banana Shpeel” at the Chicago Theatre (it moves to New York’s New Beacon Theatre in February), it is a gap that exists no more. “Banana Shpeel” — originally billed as a distinctive fusion of vaudeville, clowning and musical comedy — will be Cirque’s first foray into the world of legitimate theater. Or will it?

For commercial theater is a byzantine world dominated by rules, agents, unions, writers, composers, star names and ways of operating very foreign to the famously esoteric, famously creative and famously confidential Cirque process of “création.” It is a less-than-controllable world in which Cirque, for all its sophistication, lacks experience. By its own admission.
“Banana Shpeel” will officially be unpeeled Dec. 2 in Chicago. And those who have bet against Cirque in the past have usually found themselves stuck on black with the wheel showing red. But the story so far of “Banana Shpeel” has included some slip-ups.

“We had a lot of good stuff right from the start,” says Serge Roy, the cheerfully frank Cirque producer in charge of “Banana Shpeel.” The ebullient Roy is sitting in the balcony of the Chicago Theatre, even as the remarkably calm and focused director, David Shiner, forges (and re-forges) the high-stakes show on the stage below. “The problems came,” says Roy, unperturbed by the admission, “when we started to put everything together. We were getting into a world in which we are not at ease.”

Those problems were, in essence, the hiring and firing of the show’s two stars: Annaleigh Ashford (who was a longtime Glinda in the Chicago production of “Wicked”) and Michael Longoria (who performed as Frankie Valli in “Jersey Boys” on Broadway). In September, both were seen (and can still be seen via YouTube) on the season finale of NBC’s “America’s Got Talent,” performing a signature number from “Banana Shpeel.”

They are now gone, their characters written out of the show. The number they were singing is gone too. The original composer, Laurence O’Keefe (another big Broadway name who penned the score to “Legally Blonde: The Musical”), has also come and gone from the project. All of his music has been cut from “Shpeel.”

“We make changes like that all the time during our creation process,” Roy says. “The only difference is that, usually, nobody hears about them.”

Indeed not. Internal creative decisions at Cirque typically have stayed internal, which is the way most businesses, creative and otherwise, like to keep things. And (with the notable exception of its “Criss Angel Believe” show in Vegas) Cirque has always de-emphasized individuals and emphasized the creative whole.

Millions of people have seen “O” in Las Vegas. Very few of them would remember the names of any of the performers they saw. It’s the same with “Ka,” “Mystere,” “Quidam,” you name it.

But unfair as it may be, the firing of a troupe of unknown Ukrainian acrobats in Montreal is a very different matter from nixing three respected Broadway names before rehearsals in Chicago.

When Cirque went to agents in New York, seeking top music-theater talent for a show widely described as Cirque’s first foray into musical theater, the presence of those stars was a legitimizing factor. And when they were removed prior to the process of moving to Chicago, the news spread quickly through the New York theater community (and reached this reporter).

Initially, at least, Cirque seemed surprised by all the fuss. But they are now talking about it openly.

Roy and Shiner are at pains to say that the decision to write out Ashford and Longoria had nothing to do with their work or talent. It was simply a decision to move in a new creative direction. In a one-word statement issued through her representative, Ashford said she was “shocked” by the turn of events that removed her from the show.

“Banana Shpeel” had grown out of a desire of Cirque founder Guy Laliberte’s to create a vaudeville show. Partially as a response to the economic troubles in its core Vegas market, Cirque has been doing a lot of brand extension recently, including a foray into magic. Because high-end magic tends to be dominated by individuals who guard their tricks and their personal brand, that meant Cirque had to break its no-star rule and get into creative bed with Angel.

Longtime Cirque watchers have also noticed its Vegas portfolio is now shrewdly segmented so that there are shows appealing to many sections of the market. “Ka,” an operatic show created by Robert Lepage, holds down the arty high end, while “Criss Angel Believe” attracts a much younger, more blue-collar crowd. But although its tent shows are now slotted into arenas after exhausting the markets that can support the big tops (Sears Centre Arena in Hoffman Estates has announced a booking of the old tent show “Alegria”), Cirque has never had the kind of show that could tour to actual theaters.

So why not create such a show? Madison Square Garden Entertainment, which owns the Chicago and the Beacon, became an enthusiastic partner. Shiner, a highly regarded clowning and physical-theater expert and the creative force behind the hugely successful tent-show “Kooza,” was called in. Shiner put together a conceptual outline. The initial show-within-a-show concept involved a colorful producer, one Marty Schmelky (played by Jerry Kernion), who is auditioning for his ongoing contemporary vaudeville show, “Schmelky’s Spectacular.” Ashford was to play the producer’s singing-and-dancing daughter. Longoria was to play an aspiring actor. The two were to fall in love. Also included: clowning, circus, variety, vaudeville and a Broadway-style love story, replete with much singing and dancing to original O’Keefe numbers.

But once “Banana Shpeel” went into rehearsals in Montreal, it became clear that it could not be or do all of those things at once. According to several of the people involved, there were just too many characters requiring too much exposition.

“The show was becoming too story-based,” Shiner says. “We also wanted to include clowning and variety. But the story element was outweighing everything else. There just wasn’t enough time. … So we would have needed to diminish the roles played by Annaleigh and Michael. And we decided that would have been a waste of their huge talents. It all was a learning process for everybody.”

“It was dragging,” says Roy. “We wanted to do a show with humor and fun. We never wanted to do a Broadway-type show. We found we weren’t comfortable with that. We like to improvise. We like people to have a good time. So we asked ourselves, what would happen if we didn’t try to tell all that story? And once we weren’t telling that story, many of the songs were not needed.”

So Ashford, Longoria and the song stylings of O’Keefe were out. And Cirque, in essence, went back to a world in which it is more comfortable. And within which it has never failed.

“We wanted to revisit the world of our show,” Shiner says. “And we wanted to get our arms around it.”

For sure, Cirque fans will likely notice some new-to-Cirque elements in “Banana Shpeel,” including dialogue and hard-edged slapstick (and, of course, the proscenium setting). But, at least as Shiner describes it, the “Shpeel” that will open Dec. 2 has been shorn of its narrative clutter, and now has a very simple plot.

Various circus acts audition (or are already in Schmelky’s show). A core clutch of five clowns (two of whom are Schmelky’s assistants) alternately aid and disrupt the auditions. A live band, clowning, comedy, variety, tap-dancing and hip-hop are all included. The style is modern and hard-edged. There is a foot juggler. But there is no Broadway-style book. Not any more.

Shiner says the clown routines were created from scratch in the studio — very much in the European theatrical tradition — and were always intended to be at the core of “Banana Shpeel.”

“Our show,” Shiner says, “is based in comedy and dance.”

It will be as simple as that. Cirque has never claimed to have a pretty process. Even during technical rehearsals, Roy continued to tinker. He talked about adding a few more performers, perhaps. He had plans to restage one of the biggest set-pieces. “I’d wish I had a turntable for that,” he said, wistfully, as the remarkable foot juggler works below.

For his part, Shiner says he plans to keep creating long after Dec. 2. “For me, the work is never done until the producers say I can’t come back,” he says.

Unlike on Broadway, nothing (and nobody) is frozen in a Cirque production. Its creations change all the time, even decades after their “création,” and the people who create them say there is no need to change that modus operandi, just because they happen to now be behind a proscenium arch.

A few days before the first preview, Daniel Ross, another of the creatives involved in the production, was standing in the lobby of the Chicago Theatre. Once Shiner and Roy leave, Ross will be the one charged with maintaining the show, which Cirque hopes will tour nationally, maybe internationally, after its New York stand. For years to come. Ross was asked how things were going.

“It’s always the last crunch,” he said, raising his eyebrows and smiling broadly. “I guess we thrive on that.”

I was very lucky to catch one of the dress rehearsals, before they opened!

the show was fun
very exciting!
THE CLOWNS ARE FANTASTIC!!!!!!!!!