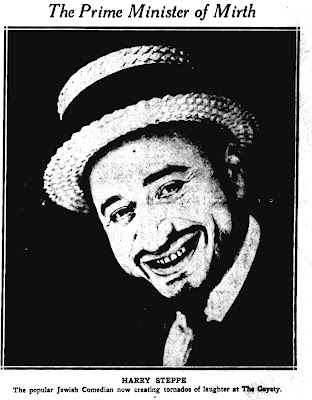 Harry Steppe (born Abraham Stepner, March 1888 – November 22, 1934) was a Jewish-American actor, comedian, writer, director and producer, who toured North America working in Vaudeville and Burlesque. Harry claimed to have coined such terms as "top banana" (the headliner or top act on the bill), and "second banana." As one of Bud Abbott's first partners, Harry introduced Bud to Lou Costello in 1934.

Born in Moscow to Russian immigrant Orthodox Jewish parents, Steppe was billed as a Hebrew, Jewish-dialect or Yiddish character comedian. His gags and skits were also performed by such well-known comedians as Phil Silvers, The Three Stooges, and Abbott and Costello. Although Steppe had penned the "Pokomoko" (aka Niagara Falls) Routine ("Slowly I Turned, step by step, inch by inch...")" and performed it with The Three Stooges, other writers, including fellow Vaudevillians Joey Faye and Samuel Goldman each laid claim to the skit, too. "Lifting" routines from another performer was standard operating procedure in the early-to-mid 20th century, and the famed routine was performed, without originator credit, by...

Phil Silvers credited Steppe with "introducing the phrase 'Top Banana' into show business jargon in 1927 as a synonym for the top comic on the bill. It rose out of a routine, full of doubletalk, in which three comics tried to share two bananas." Silvers further popularized the term "Top Banana" in his 1951 Broadway musical and 1954 film of the same name.

Steppe performed at several well-known theaters on the Orpheum Circuit. According to Loew's Weekly (a program issued free to theater patrons), in a June 18, 1928 performance at the Loew's Theater in New York, he was billed with Lola Pierce. Reportedly, Pierce was an actress he was linked to romantically. Other paramours of Harry Steppe included Vaudeville performers Victoria "Vic" Dayton (whom he apparently married), Edna Raymond and Leona St. Clair

Pulmonary edema contributed to Steppe's death, according to his death certificate. He was at Bellevue Hospital in New York, New York for two days and had been ill for a month, according to a story in Variety magazine, Nov. 27, 1934. Abe Stepner's obituary appears under "Feature News," Billboard magazine, Dec. 1, 1934, pg 5.

I believe the term was originally "First Banana". When they created the Broadway show 'Top Banana" starring Phil Silvers, Johnny Mercer who wrote the music, he changed the term to fit better into the lyrics. Phil Silvers, Milton Berle (who was the basis of the Jerry Biffle character in the show) and the surviving comics of that era began using the term.

Thanks for sharing this, Pat - great to learn about Steppe - I know a bit about Vaudeville, but this shows how little I really know! (and I value tradition a lot) -- my old teacher Carlo Mazzone-Clementi always emphasized the principle of "Steal a bit and make it your own!" This article was another fine example of that tradition.