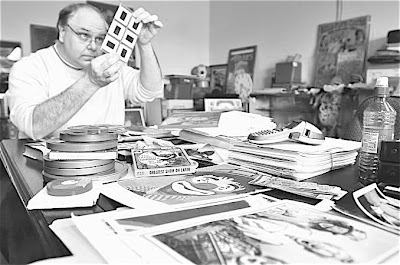 Greg DeSanto sorts through memorabilia at the new Baraboo headquarters of the International Clown Hall of Fame and Research Center. DeSanto was recently named the organization's executive director.

An organization dedicated to historic preservation announced Monday it is moving its headquarters to Baraboo, and has appointed a clown as its new leader.

Not if you’re talking about the International Clown Hall of Fame and Research Center.

"We are delighted to send in the clowns — and send them to Baraboo, back home where they belong," said Greg DeSanto of Baraboo, who was recently named the organization’s executive director.

As a husband and wife clowning duo, Greg and Karen DeSanto performed at the Circus World Museum for more than seven years. Greg has also been featured in Ringling Bros. and Barnum & Bailey, the Big Apple Circus and other major shows around the world.

After ICHOF’s lease ran out at its former Milwaukee base, memorabilia was moved into storage, where it has sat for the last year and a half, DeSanto said.

He was busy Monday sifting through boxes of old photos, props, and shoes so big they would make Shaquille O’Neal blush, at ICHOF’s new Baraboo headquarters on Fourth Street across from the Sauk County Courthouse lawn.

DeSanto has had some help sorting through material from Ralph Pierce, president of Circus World Museum, Inc., a founding and fundraising arm of Circus World.

Pierce, a longtime collector of circus memorabilia, said ICHOF’s new headquarters is a perfect fit for Baraboo, the capital of circus history. And he said ICHOF provides a unique look at life as a circus clown through pictures and documents that show performers in their personal lives outside the circus tent.
"It’s adding some additional history that might not have been known before," Pierce said. "It kind of shows how they interacted with people. You’re getting the whole social aspect of the performer."

DeSanto said he is hoping to open the downtown ICHOF office to the general public on April Fools’ Day.

The non-profit ICHOF was created in 1986 and is dedicated to honoring and supporting the international art of clowning.

Since its inception, ICHOF has enshrined 61 people, such as Charlie Chaplin and Red Skelton, who have been instrumental in enhancing and advancing the art of the clown.

The long list of entertainers includes Jimmy Williams of Baraboo, who spent 50 years as Happy the Clown.

Williams said DeSanto is the perfect man to lead the organization.

"He was at Circus World after I was and they were very funny, he and his wife," Williams said in a phone interview Monday. "It’s a wonderful thing for Baraboo.

Greg is an obvious and outstanding choice. A pie in the face to him!

This is absolutley the best thing that could have possibly happened to this organization. Greg has dedicated his life to circus and clown history. With Greg managing this in the town of Baraboo, You could not find a more perfect fit anywhere in the world. Now we will finally witness the real potential that this organization has to offer. This is the biggest and best news to hit the clowning community in a long time. I am pumped. I can't wait to go to Baraboo in April!!!!