An Elephant, a Jellyfish and a Man With a Lot on, and in, His Mind 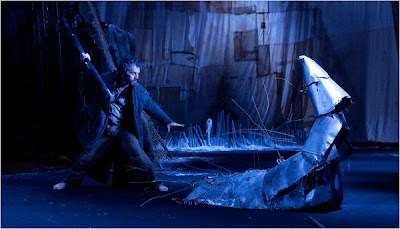 
Apparently you can go home again. You just have to be prepared to confront another version of yourself when you get there, a version who may not be at all sympathetic to the intrusion.
In “Raoul,” which is having its first American performances as part of the Brooklyn Academy of Music’s Next Wave Festival, the French artist James Thiérrée ruminates on themes of place, identity and the self. Given his varied skill set (clowning, acrobatics, illusion, etc.), he and his troupe, Compagnie de Hanneton, do so in a fantasy world of shape-shifting spectacle, slapstick humor and melancholy whimsy.
The work is essentially a solo, though Mr. Thiérrée does get several assists, including from his mother, Victoria Thiérrée, who designed the large fabric animals that occasionally float into the space to trouble the title character’s sense of the world and himself. (The magically plodding elephant was my favorite.)
Mr. Thiérrée, who has a full set of curls, deft physicality and a quick, often bemused smile, is an utter charmer onstage. His Raoul is forceful but lost, puttering resolutely in his rattling little cage of a house, with its richly decrepit carpets and armchair, like a shut-in Don Quixote.
But the charms of “Raoul” the show quickly wear thin, as Mr. Thiérrée tries on one theatrical ploy after another, never settling into any of them long enough to satisfy the existential questions on his mind. Press materials compare the work to Beckett, but this is a fantasy too; clowning is an art of failure, and “Raoul” never sets the stakes high enough to make the impact of its title character’s missteps, vulnerabilities and outlandish coping strategies deeply enough felt (though Thomas Delot’s sound design does its best to suggest yearning emotions).
Instead of registering as organic developments, Mr. Thiérrée’s actions stack up like manic little set pieces: now he plays the violin, now he whirls a top around his head, now he does a boneless slide down a giant ladder. He flies, does battle with an oversize jellyfish and nimbly scales the walls of his increasingly ravaged shelter. Everything comes undone, save Mr. Thiérrée’s shtick.

I saw this show last Friday night with my friend, Michael Karp. I believe Mr. Karp would agree that if the critic from the New York Times found Mr. Thiérrée’s "Raoul" somehow lacking, the fault is with the critic and not with the production.