The first sight of the star of The Pee-wee Herman Show is a trip. Eternally natty in his little red bow tie, young master Herman steps out from behind a curtain to open his beguiling time-warp Broadway romp. The fan-filled audience cheers wildly — they love him enough to marry him! For a moment the clock spins backward: Paul Reubens — who first pranced in character three decades ago — may be a decidedly adult 58-year-old man, but the exuberant, hyperactive boy in the spotlight is an age-resistant, rouged child of 1980-something. 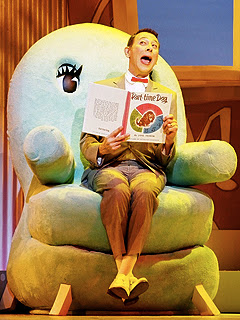 The reunion of Pee-wee and his pals from the great TV show Pee-wee's Playhouse is staged with modern brio by director Alex Timbers (Bloody Bloody Andrew Jackson), who produces a dazzling acid ride of color, light, goofy anarchy, punchy video clips, and juicy sound effects. (Here's our review of last winter's L.A. production.) For fans, there's plenty that's familiar. Hi, Chairry and Magic Screen, the Paleolithically pre-iPad reference tool! Hi, Miss Yvonne, the most beautiful woman in the world (played as ever by Lynne Marie Stewart)!
In a liberating wink, Reubens doesn't stint on giddy new jokes at the expense of e-mail, ShamWow! pads, and the gossip-page knowledge of his own notorious history. Mailman Mike (John Moody from the original stage show) delivers a letter from a prison friend, and Pee-wee even shows off the abstinence ring he proudly wears (take that, Jonas Brothers!). Thus do the centuries past and present collide while the host cooks deep-fried onion rings for his buddies and wishes his deepest wish: to be able to fly. What he's really cooking up, though, is a knowing Proustian reflection on time passing and innocence lost — both Reubens' and our own. And throughout, the secret word is fun. A–
Posted by Pat Cashin at 11/13/2010 01:54:00 PM