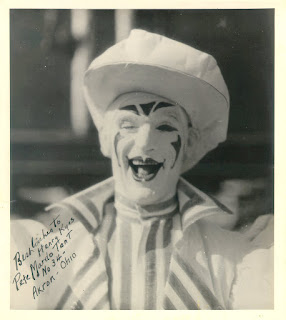 Once each month the clowns of Ringling Brothers' circus, which is coming here Wednesday, Oct. 21, hold a meeting and elect a "joke editor." It becomes the duty of this official to buy all the newspapers procurable and to read them religiously. Whenever he comes upon a topic which, might serve for an up-to-date parody or humorous caricature,he puts it aside.

Every afternoon at 1 o'clock there is a meeting of what is known as the "sawdust senate." This is composed of a committee of twenty clowns selected from the entire army of jesters. The "editor" makes his report to this body andthey discuss it and select those ideas which may be turned to account on the hippodrome track.
This is the secret of the down-to-the-minute performances of the Ringling Brothers' skylarkers. There is not a fad of dress, dance or unusual innovation which they do not portray in some ludicrous manner.
They pantomime public and political events, but with so much good humor that the bitterest of factionists pound each other on the back and roar with laughter. The clowns do not fear to enter the land of invention, but introduce gaudy painted airships which skim around in the tent top and explode while in mid-air. They flit around the hippodrome track in queer looking racing cars, throw terrible looking but quite innocent bombs, and shoot each other
from big wooden cannons. They mimic everybody and everything.
Sandwiched between the gorgeousness of the new spectacle of Solomon and the Queen of Sheba with its cast
of 1.250 characters, and the daring of the areanic displays, these Merry Andrews temper the entire circus program with the rarest of comedy.
Posted by Pat Cashin at 3/17/2016 12:30:00 AM