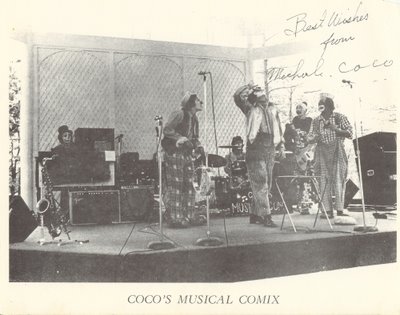 Mike Coco, the very first clown I ever remember meeting in person (after Otto Griebling, but that's another story) on my very first trip to an amusment park, Great Adventure (pre-Six Flags ownership) in Jackson, NJ.

If I remember correctly, Mike performed walkarounds and worked the circus show in the arena in the western themed end of the park. He also worked the lakeside pavilion with Coco's Musical Comix (pictured above) singing any and all circus and clown themed hits of the rock and roll era.

For those of you who have never been to Great Adventure...

In the early 70s a real estate tycoon named Warner LeRoy wanted to open a Walt Disney World like resort in the pine barrens of New Jersey; a theme park with a drive-thru wild animal safari. New Jersey did have a short lived animal park in the 1970’s similar to Great Adventure’s safari called Warner Bros. Jungle Habitat (this was not owned by LeRoy) but Jungle Habitat had safety flaws and was an insurance nightmare (second only to Vernon Valley/Great Gorge Action Park, the deadliest amusement park in history) , so the park closed in 1976. LeRoy improved the drive-through safari concept and made it safer. Throughout the early 1970’s, Great Adventure slowly rose, turning into one of the nation's premier family theme parks.

Great Adventure opened on July 4th, 1974, with major rides, a 500 acre wild safari; just a huge entertainment complex. They even boasted the World's Largest Ferris Wheel called the Giant Wheel (eventually renamed Big Wheel when the ride lost the record). The wheel was the tallest structure in the park at opening, standing at 150 feet tall, and manufactured by famous designer Anton Schwarzkopf.

The 1974 season of the park was a success as was 1975 and '76. In the fall of 1977 Six Flags bought the park. The park continued to feature clowns after Coco but when Six Flags took over the clowning switched to recent CC grads and finally to any teenaged kid in a clown suit. By the mid 80s the clowns were fazed out in favor of costumed Warner Bros. characters.
Posted by Pat Cashin at 7/14/2006 07:29:00 AM