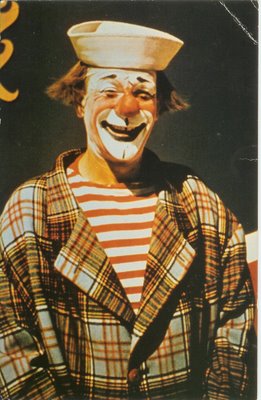 (Photo from a Circus Hall of Fame Sarasota, FL postcard)

1991 International Clown Hall of Fame inductee Michael Polakov or "Mike Coco", as he is known, achieved fame in England where the family came while he was a youth and his father (also known as Coco) was the longtime star clown of the Bertram Mills Circus. He was associated with the Bertram Mills and Billy Smart Circuses in England, which later included tours of Europe. He came to the U.S. in 1953 to work for a limited time with the Mills Bros. Circus, before returning to England. Coco later returned to the States and joined Ringling Bros. and Barnum & Bailey, working both as a member of the alley as well as spending eight years as Advance Clown and Goodwill Ambassador. He is credited with creating the makeup for Ronald McDonald, touring theme parks with Coco's Musical Comix and continued performing in circuses and acting as an Advance Clown for smaller shows.
- Paraphrased from the ICHOF Website
Posted by Pat Cashin at 7/14/2006 08:31:00 AM