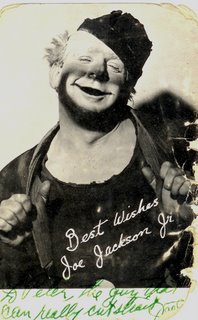 An autographed photo of Joe Jackson who inherited a brilliant breakaway bicycle act and tramp clown character from his father, over time adding his own spin to both. Between father and son the act was performed in vaudeville, circus and arena shows internationally for over 100 years.