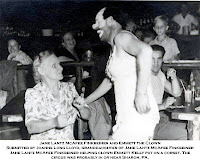 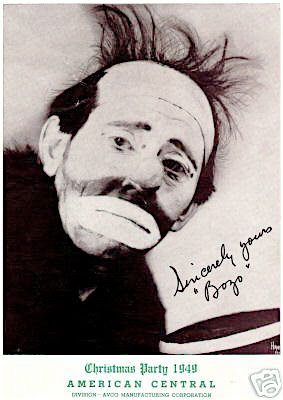 I would have to agree. The resemblance is uncanny.

Bozo Harrell looks like he might be the tramp clown that I've seen working with Olsen & Johnson on a lot of their early television dates. Among other bits, he performed a very quick midget car gag that combined elements of Lou Jacobs, Kinko Sunberry and Bobo Barnett's routines on an episode of the Steve Allen show that I saw at the Museum of Television and Radio (now called "The Paley Center for Media") in New York.

If he had a background as a burlesque comic, I'd bet dollars to donuts that it's got to be the same guy.

Anyone else out there have any info on Mr. Harrell?

I'll go along with that, Trudy & I both racked our brains over it, we both knew the face but coulcn't come up with the name. I had forgotten about Bozo. He also did an act balancing very heavy objects on his chin, like an old wagon wheel, and was not a prop made to look heavy, it must have been 100lbs+. That also seems like a 100 yrs. ago, well at least 50!!!!

Pat
My name is Phyllis Harrell Brush.
Ralph "BOZO" Harrell was my uncle.
He became BOZO in 1914. He traveled with many circus's. He was with Roy Rogers in the 40's. He performed with many Shrine Circus,Cole Bros.Siebrand Bros. Piccadill Circus Headed clown Alley, Hagan-Wallace Circus 1930's. Barnes & Curruthes, Rench Wright, Ernie Young, Tom Packs, Clyde Beaty Circus, 101 Ranch, Royal American Shows in the 50's and many many more over the years. He also did the burlesque & Juggling act for Moose Lodges and clubs. He was a wounderful and funney man.
I have a question. When I was young my parents took me to Barnams home in Sarasota Fla. There was a building like a museum, and they pictures of clowns. There was a picture of BOZO coming out of his trailer with his finger touching his eye. I went back in 1987 and took my kids, and all those pictures where gone. I ask the guy working there where they were and he didn't know. Do you know what happen to them? I would love to see that picture again. Please contact me at mommyphil@aol.com
Thanks,
Phyllis

hi Pat,
my name is Greg Powell i m Bozo Harrell s great nephew . With the help of Phyllis Brush and my wife they help me fulfill a dream to honor my uncle Ralph to preform in the shrine circus 3 years ago in march for my 25 th wedding anniversary in Dayton Ohio . i have alway s had a desire to make people laugh but have`nt taken the step s to go to a clown school . i would like to do like uncle Ralph did the silent clown my e- mail is gpbozo04@yahoo.com thank s Greg

Hello. I know this is an old post. My name is Brian, and "bozo" is my step-great grandfather. That is indeed who is pictured here. He married my great grandmother after her first husband, my grandmothers father, died. I only knwe him briefly. My sister has an entire room in her house dedicated to my familys circuis heritage. I got a chill when i saw the pics. Thanks.