VANCE COLVIG: Bozo's Got a Secret


The guest in this segment of I've Got a Secret is Rodney Dangerfield but that's not what's interesting about it.

His secret involves a gentleman named Vance Colvig. Actually, his name was Vance Colvig, Junior. His father (Vance Colvig, Senior) was also known as Pinto Colvig, the voice of Goofy and many other classic cartoon characters. Dad was also the original Bozo the Clown, initially on records and then on early television.

Later, Vance Junior became a Bozo. He was Bozo the Clown on Los Angeles TV, appearing every weekday on KTLA, Channel Five from 1959 to 1964. 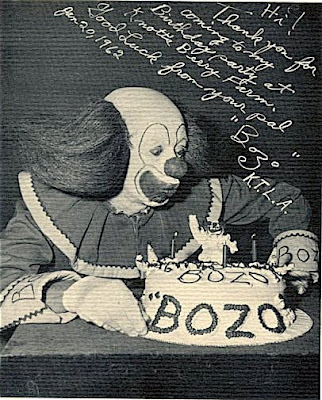 He was also an occasional cartoon voice, most notably playing Chopper the Bulldog on the Yakky Doodle cartoons for Hanna-Barbera. Later, he did all sorts of film and TV acting jobs and for some reason, usually wound up playing a wino or derelict. One of his last roles — as a bum, of course — was in the Weird Al Yankovic movie, UHF. Anyway, if you were a fan of anything he did, here's a rare chance to get a look at him.

I appeareard on an episode of Love American Style' with Vance Colvig. I grew up with him as my local BOZO. He was a really nice man and we cracked jackpots all day much to the directors dismay.

It was a good day.

Clownron,
I'd like to talk with you about your work with Vance Colvig Jr.
Maybe Pat can get us in contact with each other.
Please contact me at; bozo_history@yahoo.com.
Thank you,
Tom Holbrook
"The Bozologist"

I worked with Vance Covig JR."aka Bozo" in the summer of "63". I play Bozo's side-kick Butchie Boy. The only paid Butchie Boy. True story.