I had the chance to take the family (and Drew Richardson) to the new Prudential Center in Newark to see the Ringling 137th edition Red Unit's Bellobration Tour. We enjoyed the show, LOVED the arena and had a great time talking with Ruth Chaddock before meeting up with the Alley.
Old friends Lance Brown (fellow class of '97 alum and one of the last CC grads left going into next season), Leo Acton (headed here to the NY/NJ metro area after this season) and Larry Clark all seem to be doing just fine and dandy. New friends Dustin Portillo (soon to be Boss Clown) and Brandon Foster looked to be juiced headed into Winter Quarters.
Speaking of next season, take a look at this flyer for next year's show... 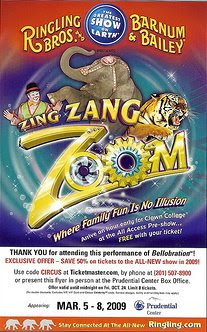 "Arrive an hour early for Clown College at the All Access Pre-Show"
What's that all about??? The All Access Pre-Show (formerly the 3 Ring Adventure) is great and all but it's no Clown College. It isn't even as much fun as seeing all those beautiful George Shellenberger props being wheeled out there on the track, rigged to explode and best viewed from the safety of your seat.
The whole affair just makes me nostalgic for the early to mid 70s when my Dad used to grumble about having to get us to the Garden early so that I could be there when the doors opened and watch the clowns' pre-show.
Back then there were 25-30 clowns per unit, Lou Jacobs, Mark Anthony, Duane Thorpe, Prince Paul, Bobby Kaye were still with the show. I'm now so old that Otto Griebling and Frankie Saluto were still there the first few times I went!
Graduates of the then-new Clown College included Frosty Little and future deans Steve Smith, Ron Severini and Dick Monday were out there on the floor along with the likes of Barry Lubin, Peter Pitofsky, Billy Vaughn, Ruth Chaddock, Peggy Williams, Ron Jarvis, Billy Baker, Sparky Washburn, Swede Johnson, Keith Crary, Mitch Freddes, Zappata, Danny Chapman, Levoie Hipps, Kevin Bickford, Robin Shaw, Earl Chaney, Mike Padilla, Johnny Peers, Maude Flippen, Jim Howle, Richard Mann, Eric Braun, Rick Cobbin, Janice Gillespie, Leon McBryde (doing advance), Ray "Anchor Face" Lesperance, Don Debelli, Bob Zraick, Chris Bricker, Tim Torkildson, Antonio Hoyos, Lazlo Donnert, Dougie Ashton and the many others who made the Greatest Show on Earth such a magical experience when I was young.
Way back then kiddies, the programs were pretty expensive, $2.00 or $3.00, and EVERY kid in the Garden had one of these to swing around when the lights went down... 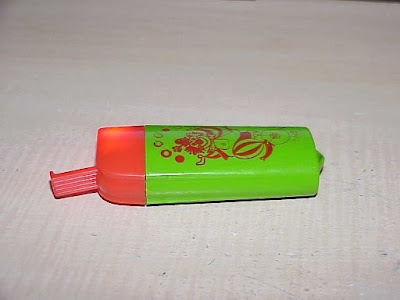 Yes, back then the programs seemed like a lot of money. But the programs were a great value packed with interesting stories about who, what, where and when. Plenty of pictures of all the stars and the clowns. Also included was a running order of the "Program of Display". Sorely missed in the new format RBBB programs.
Long after circus day you could re-live your memories by thumbing thru your program, kicking back and closing your eyes.
By the way the RBBB program for Bellobration was pushed up to $20 from $15 for the Newark date and the balance of the season. The reason. They were running low on inventory. It was decided that by raising the price of the program the inventory could be stretched to cover the few remaining dates.
I wonder if they ever heard about ALLOCATION OF INVENTORY. Glad I bought my Bellobration Program last year.
Joe G

I found one of my 87 programs with tommy and tammy parish cleaning the garage out I was a sophmore in highschoool and im 36 nd to this day I try to go to evry production and get inspired by clown alley,also I remember the lights used to have the rotating beacon on top and I would share between my brother and sister and those where ten dollars back in the day

Those lights were 50 cents in the 60's; my Irish aunts refused to buy them because they "were too dear".

In 73 our big light was the "hey... hey... ASTRO LIGHTS!!!" The spiel had to be delivered with an Arabic accent, and at the same decibles as a barking seal. I believe that Johnny Peers father may have created the original lights. A mercury switch and string.

Pat, I am glad you enjoyed the early daze. We were anarchists in grease paint. It was a very special time.

Being a Ringling performer myself in 1957 I can very well follow and agree with all these comments. Knew all the old time clowns --(Great ONES at that).
I dug up an old Ringling program -- 1935 to be exact, -- Price 10 cents. It contains not only the program, photos, advertizement --- It was called Magazine and Daily Review. The photo of "Flying Concellos" Art and Antonette look so young. Sure brought back fond memories. I sure enjoy reading these Blogs. Thank you Pat. Keep up the great job.

whats going on now? ringling is making a big mistake by dragging the once respected clown college name into something that they can just put in their wallets. clown college used to be a stepping stone to a true and wonderful artform that been around for ever. now its a gimmick? something to sell tickets? never mind that the show stinks, instead of working on that lets think out of the superficial box.

Clown college was always a hook to gather PR for the shows. Yes, it was a training place for newbies to get a foot in the door and learn from the masters of the craft. But it most definatly was a "gimmick" to create awareness and publicity for the circus it served.

okay it was a gimmick but it had backbone to it people really learned something and it was respected as a stepping stone. now it just sounds desperate.