LOS ANGELES – Neal Hefti, a Big Band trumpeter, arranger and composer of themes for the movie "The Odd Couple" and the "Batman" television series, has died. He was 85.
Hefti died Saturday at his home, said his son Paul Hefti. 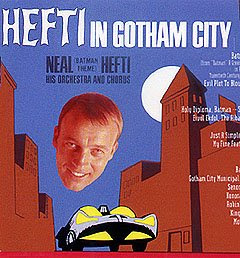 Neal Hefti's notable achievements include the iconic theme of the 1960s superhero series "Batman," which became a Top 40 hit and won a Grammy Award in 1966 for best instrumental theme. He also composed music for "The Odd Couple," "Barefoot in the Park" and "Harlow," which featured his classic track "Girl Talk."
His son said the "Batman" theme was Neal Hefti's most difficult piece, taking him at least one month to compose the driving bass and explosive trumpet bursts.
"He threw away more music paper on this thing than any other song," Paul Hefti told The Associated Press. "It got down to the blues with a funny guitar hook, the lowest common denominator and a fun groove."
Neal Hefti was born Oct. 29, 1922, in Hastings, Neb., and played trumpet with local bands as a teenager to earn money.
As an adult, he worked with and arranged music for the greats of the Big Band era, including Count Basie, Woody Herman, Charlie Spivak and Harry James.
"He was one of the really great arrangers and composers of all time," radio and television personality Gary Owens, a longtime friend, told the Los Angeles Times.
Posted by Pat Cashin at 10/15/2008 07:06:00 AM