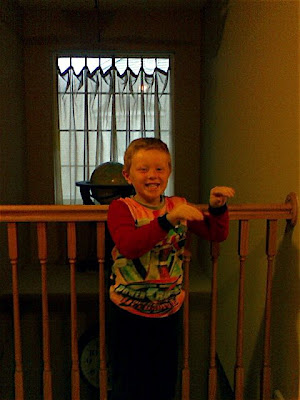 Here is a photo of Shane taken just moments ago as he demonstrates the dance that he created last night when we had dinner at Johnny Rockets in the mall.

It's called "The Salty French Fry" and it's done by bending your elbows, pumping your arms back and forth and moving your hands open and closed as though you were working two puppet mouths. While doing this you have to loudly exclaim either "Salty", "Salty French Fry" or "Salty French Fry, Baby" in a funky voice reminiscent of P-Funk's Bootsy Collins or Digital Underground's Humpty Hump.

I was sitting right across from him when he invented it. James Brown's "I Feel Good" was playing and Shane started to sing along and bop. Suddenly he found his groove, started his dance, shook his head from side-to-side like the funkiest funkster to ever funked a funk and shouted "Salty French Fry, Babies!"

It's going to sweep the nation. You saw it here first. I hope to have video available soon.

I should be able to manage the dance, but I don't think thee voices have crossed the Pond yet! But I may be out of date (as well as out of touch!)

Heh! Do the Salty! Shane's a genius.

Speaking of Digital Underground, their new album is out this week. You can get it on iTunes or at CDbaby.com (www.cdbaby.com/digitalunderground)

It's worthy of your time and money! Humpty Hump and crew come with some great stuff once again.