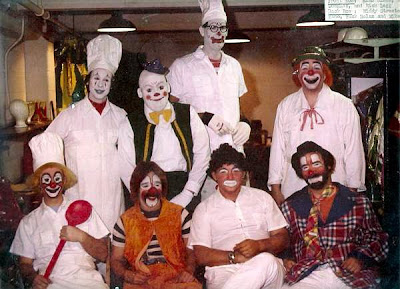 I've been looking for this alley picture for quite some time. I'd forgotten how big this print was--I couldn't get the whole thing into the scanner. This alley was hired by Jim Douglass for Gracie McIntosh's M&M Circus Internationale February 1981.

Middy Streeter was a fixture on Shrine circuses for a few years. One helluva nice guy. 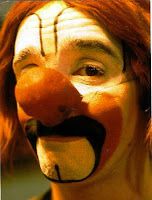 Bobby Davis was Billy Barton's right-hand man. Billy loaned him to Jim Douglass for the alley. Most audiences remember Bobby for setting web for Billy Barton, wearing only a feathered G-string and a jeweled headband, the briefest costume I ever saw on an American male perfomer. He had so much fun working with the group that he became a full-time clown. When Billy became too decrepit to do his cloud swing, he and Bobby did a clown drag number with Billy as Baby Jane (he had a thing for Bette Davis impersonation). I worked the 1984 Zerbini tour with Bobby. He was a world of fun. I miss him. 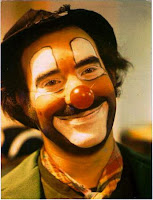 Rick Legg was a magician and pretty talented announcer. I worked the 1983 M&M tour with him. He clowned the indoor dates and announced the outdoor dates. Don Bridwell and I worked the toothache and camera gags with Rick on the microphone. avery performance was different and spontaneous, with all three of us egging each other on. 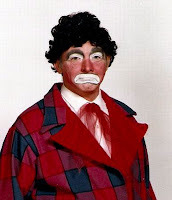 Vern Woerner was Jim Douglass' partner. Each winter Vern would build the props for Jim and I would paint them (sometimes I would do both). Vern drove the truck (Jim always carried three ring curbs, lights, sound, clown props, four floats and spec wardrobe) and supervised the set-ups and teardowns of the shows. He was the hardest working person I have ever known, and a fiercely loyal friend, once you got to know him.

For over 40 years Jim Douglass put together alleys. He usually hired eight professional clowns. Every year he produced three to five original ring gags or new variations on the classics. Although he was rarely on the big name shows (he was with Pollack Bros. for many years), he worked for 40 years (the first professional circus he ever produced was at the DeLand, FL at AGE FIFTEEN!), taking time off only for military duty. He is also on record as having twin dog acts with 21 dogs in each act!!!

Jim was also one of the founders of the Clowns of America organization. He also designed and built the original Ronald McDonald wardrobe--he lost out on the make-up design and the company instead went with the busted watermelon ass make-up we all know. In my estimate Jim Douglass is the most important US producing clown after Paul Jung. I hope some group eventually recognizes him for a lifetime achievement award.

Bobby Davis was a natural; his meshing into the alley was incredible. I have never seen anything like it, he was a perfect fit and above all very funny.

Edward "Middleground" Streeter has a most laid-back personality.

Rick Legg, a/k/a, Rick Allen is doing comedy hypnotism and hypnotism/self-improvement programs in the mid-west; it has been a while since we spoke.

The gags that year were: the Pie Shop, the Continental Army and a giant hot-dog machine.

Eastman-Kodak, based in Rochester, New York would send photographers with new cameras and new film to "test run" them at the circus. We received many photos from them.

Al Dawley was ringmaster and would wear complimentary colored coats, cummerbunds and bow ties. He would go to all the acts and get their color scheme for the day and match his wardrobe accordingly. He would lay-out all the bow ties and cummberbunds on a long table and hang the coats on a coat rack in color order.

Well, dressing in the clowns' dressing room is just asking for trouble as we jumbled up all this wardrobe components that when he was wearing "red" the act wore their original "blue". Then when he wore "green" the act wore "white".

We didn't over do it; just enough to get him thinking that his mind was going south. Between acts be would come back to the dressing room and check his written notes and not say a word to us.

After the show we told him what happened and the look of relief on his face should have been captured by the Kodak photographers.

Can you imagine having an alley on a Shrine date TODAY with 8 clowns and 8 salaries?

Those were the days...

This is GREAT stuff.

I love reading about the old shrine shows, and the alleys that used to work those dates.

If you have more...keep it coming!!

In the opinion of many, Bobby Davis was the best come in clown of his day. He was a dear soul and will always be missed by those of us who knew him.

I am now searching for the portrait I did of Baby Jane and Blanche years ago.

God Bless all you mirth makers...
Boy! Do we need you now !