FROSTY LITTLE: Before He Was The Master... 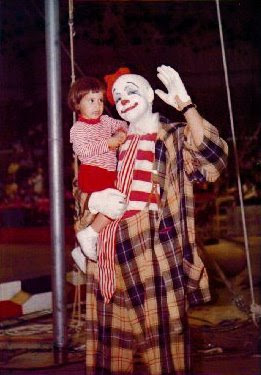 I first met Frosty In 1968 when he was performing in Orlando Florida with Ringling Bros. We had 1st row center ring seats that night and my oldest daughter Mandy was about a year and a half old. He came over and picked her up taking her into the center ring. I am sending the photo I took of them that night.

The interesting part of the story is that sometime in the mid 90s when he was in Miami I took a larger photo that I had and when I asked one of the other clowns about him he immediately went and brought him over. I showed him the photo and he remembered the exact time and place that it was taken. This has been a cherished possession since that time.

I grew up as a kid going to the circus every year and really miss the old time performances. If you can, pass a hello along for me.

Mr. Allen, thank you for sharing your wonderful memories and for providing us with this very rare photo of Frosty wearing gloves! ; )
Posted by Pat Cashin at 1/28/2009 12:55:00 PM

My very first Real Clown portrait was of Frosty. It was at the Adler Tent's "Sugarfest" for the Ringling show around 25 years ago. Frosty had just gotten some coffee and cake, ie coffee cup in one hand and cake in the other. I asked if I could impose upon him for a photo. He graciously moved under an overhead light, looked up and smiled. One of my favorite shots of a great clown and a great fellow. Years later at the CFA convention in Maryland I gave him an 11x14 of that shot. Just some wonderful memories. Thanks FROSTY.

I probably mentioned this before...
I have 3 letters from Frosty, handwritten, several pages from 1971 and 1972 that he graciously sent to me (14/15 years old) with encouraging and kind words of encouragement to pursue a circus career.
Years later, when I looked back and think of the 1001 things he had to do on any given day and that he would take time to write to some kid in New York--I am amazed and very grateful and most appreciative.
Pat, next time I see you I will bring those letters.

Truly one of the greatest clowns of all time.

I telephoned Frosty at his home in Burley, Idaho about a year ago. I had many fond memories of seeing Frosty perform while I was a child at the old Baltimore Civic Center and was actually in awe that he was so easy to locate. I initially spoke to Frosty's wife, who graciously handed the phone to Frosty. During our conversation, I asked Frosty if he could send me an autographed copy of the book he wrote detailing his circus experiences, as I was a part-time professional clown and a collector of circus clown memorabilia. Frosty replied that he would love to, but apologized as did not have any copies left, and the book was out of print. When we ended our conversation, Frosty asked for my address and said he would try to send me something. A few weeks later a small envelope arrived. Inside was a folded up, typewritten brochure that listed Frosty's accomplishments. It looked like a first attempt at a resume, and appeared to have been photocopied many times.
I telephoned Frosty and again spoke to his wife. I heard Frosty's wife say, Hon, it's that nice young man calling you again." Frosty got on the phone and I asked him if he meant to send me this information. Frosty said, "Wait a minute, you didn't get the package I sent?" When I replied I had received a brochure, Frosty replied, "Oh just wait, there will be something coming in the mail soon...you'll see."
The next day I received a large package. Inside was a 4 page handwritten letter from Frosty, talking in great detail about his time in the circus, especially the size of the RBBB clown alley and his experiences at Madison Square Garden. Frosty also included a personalized, autographed photo.

It is times like this that I know why Frosty was bestowed the title of Master Clown.

Frosty is a class act, a clown's clown, a throwback to the glory days of the circus (at least my glory day memories of the 60's,
70's and 80's) and a real gentleman.

The definition of a "class act" is someone who does something kind,remarkable, etc. without an expectation of anything in return.

There is nothing I could give to Frosty. He has been there, done that, and has a thousand laughs to prove it. About the only repayment I can offer is to ensure my clowning represents the highest standards available in the art...as found in my costuming, character development, and presentation of my act.

I will never forget Frosty's kindness.

Thank you Pat for giving me a forum to tell how much Frosty's selfless act meant to me.