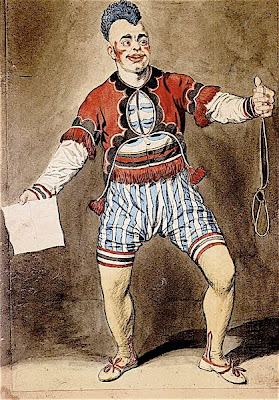 AH! YOU should have seen Grimaldi!” There was no virtue that could not be found in the everyday Grimaldi, said that wise and friendly guide to pantomime and popular theatre Willson Disher, in 1924. He was almost unbelievably modest, though he revelled in the love of his audiences. He was honest and sincere, full of homely sentiment, and as simple-hearted a man as ever breathed. In his notebook of 1807, he wrote:

May our conscience be sound, tho’ our fortune be rotten.

The harvest of life; Love, wit and good humour.

May the Lovers of a glass never want a bottle.

On the stage, however, he possessed every vice imaginable. He was “a thief, a coward – a most detestable coward, cruel, treacherous, unmanly, ungenerous, greedy, and the truth was not in him”. He feigned condolence for the very misfortunes he had caused. After a self-approving chuckle he would give a contemptuous look, half pity, half derision, at his dupe, and then show great caution to escape discovery.

It was said that “speech would have been thrown away in his performance of Clown; every limb of him had a language”.

His audiences were forced to doubt whether honesty were not a kind of prejudice. For all his sins, multiplied up to murder, the children, said a wise contemporary critic:“loved him, yearned for him, wanted to share in his doings; felt a little volcano raging within us whilst he was perpetrating his atrocities. ‘He’ll be found out!’ and we clasped our tiny hands till the nails cut into the palms; no, he’s safe, and away goes the monstrous booty into that leviathan pocket of his, that receptacle of all sorts of edibles, and occasionally of kettles full of boiling water, and even lighted candles”.

Ah! So they saw Grimaldi in his pomp. Andrew McConnell Stott has had fun with this life, weaving in and out of Georgian theatre, the mechanics of tomfoolery, the sights and sounds of London, the dissolute crowd, who, according to Sir Walter Scott, prosecuted “their debaucheries so openly that it would degrade a bagnio” . This is a guide to the pratfalls and slapstick of the history of pantomime: though Grimaldi was a clown, he was neither a children’s entertainer nor a circus act. The Regency’s most popular and consistently lucrative form of entertainment was pantomime, and a mirror of the age with its ridiculous extravagance, liberal, self-regarding wit and obsession with being bang up to date.

And the story of The Great Joe is one of great invention, for what he invented was himself.

HE WAS BORN a Cockney in December 1778, his father an Italian, a brilliant acrobatic dancer, a founder of a school of pantomime at Drury Lane, and an out-and-out blackguard: “Grim-all-day” was coined of him. It was reckoned he hightailed it across to England because of a lurid scandal concerning his blood-relationship to the grotesque creature who passed as his wife. His violence was unceasing: he smashed his children’s heads on the kitchen wall, he left his wife blinded for 10 days after a particularly savage beating.

The infant phenomenon that was wee Joe, age two and a half, first trod the boards at Sadler’s Wells in 1781. By the time he was 17, he was one of the leading lights of the company: the troupe included Thomas Dibdin, a genius at light verse; the veteran French clown Dubois; and “the ever sportive, elegant and flexile Mrs Wybrow”, a Columbine who gave “various and scientific displays with the broadsword”.

Sadler’s Wells offered him full scope for the inherited comic genius he was richly developing. Stott sums up the new face Grimaldi had devised: “the whole was topped with a wig, rather a series of wigs . . . red Mohicans, blue three-tufted plumes, an orange and green thistle that was half plumber’s plunger, half fox’s brush”. Each programme of the boisterous theatre had a burletta, a grand spectacle and pantomime, with various songs, dances and feats of strength or agility as well.

He learned his trade in a good school. How we would love to have heard his song Dermot O’Dooley’s Description of Egypt, and his famous “comic ditty on Fashionable Transparent Dresses” called A’nt I the Pink of the Go:

You’ll own that my style is quite high,

So transparent my dress you may see through it.

The lady’s all wear such and cry,

Curse you now don’t look me at me through it

I wonder what lady’s can mean

Who in dress so transparent their body’s tie.

To see ’em it quite shocks my modesty.

After a winter season in Dublin, which was a happy time for Grimaldi and his wife but a financial disaster for his backers, the rising star left Sheridan’s shaky Sadler’s Wells for Covent Garden.

Then there came the amazing year of Mother Goose , and superstardom. Cobbled together by Thomas Dibdin in a mighty rush, just a month before Christmas 1807, this from-scratch show sold over 300,000 tickets and is still the longest-running pantomime in history. The encomiums were fulsom and many: “as perfect a performance, as need be wished”, said one reviewer.

The Lord Chancellor, Lord Eldon, returned 11 times: “Never, never, did I see a leg of mutton stolen with such superhuman impudence as by that man”.

And: “His Clown has not been equalled – we never expect to see it surpassed. He has arrived at an acme of all clownery”.

And all this at a time when Europe was under the cosh of Bonapart’s murderous empire.

Indeed, reckons Stott, Boney may be credited with inspiring the birth of the modern entertainment industry in all its sumptuous, glamorous, vapid and commercial glory, as theatre was never so profitable or popular as it was during the Napoleonic wars.

A RECKONING THERE had to be, and Stott sums it up: “Grimaldi struggled with depression . . . His first wife died in childbirth, his son would go on to drink himself to death. The extreme physicality of his performances meant that he was disabled and in considerable pain in later life”.

He makes out that Grimaldi “instituted the modern figure of the glum comedian”, which for me is more of a publisher’s come-on.

It was on a final visit to Dublin that Grimaldi’s tortured limbs gave way. He had been in good form in Covent Garden with a new show of Harlequin and Friar Bacon . There was some excellent business with a scene in which he invaded a lady’s boudoir dressed as a chimney sweep, left his sooty imprint all over her white chairs and bed, and had the house in stitches, including a chortling George IV.

There was a new, and revolutionary piece of machinery, showing a diorama painted with views that turned on rollers, to accompany Harlequin and Columbine’s voyage across the stage from Holyhead to Dublin Bay. A reviewer in 1820 waxed particularly lyrical at this point: “. . . the sky brightens, and morning shows the mountains round the bay of Dubin. The representation is accurate in outline of those picturesque hills, and this whole scene received great applause”. (Not a review mentioned by Stott).

But for Joey the great applause had died away. He “called one of Dublin’s most eminent physicians”, who diagnosed him as suffering from “premature old age”. With legs barely able carry him, his spine curled with pain, he left Ireland, left the stage, left those who had seen him to say “Ah! You should have seen Grimaldi!”.