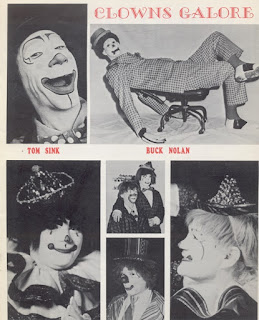 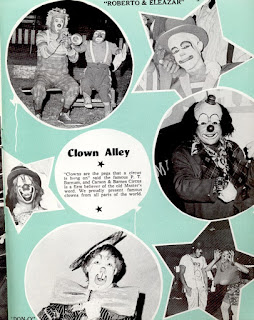 A couple more program scans from the collection of Ralph Pierce. In the first you can see a white faced Tom Sink, better known as "Popcorn", who performed on mud shows for many years. I know him best from his stint on Kelly Miller. Also a photo of Buck Nolan, long time Clyde Beatty clown, sporting a makeup that's new to me.
The second page.....that's anybody's guess. I'm guessing the pair in the upper left corner are Roberto & Eleazar....just rolls off the tongue.
Any info on any of those clowns (or the show they're on) would be most appreciated!
Additional info from Dan McCallum and Greg DeSanto: Also pictured in the first photo are Walt and Millie Stimax, who in addition to being clowns had a chimp act.
The first photo is most likely from a Hoxie Bros. program.
Posted by Steve Copeland at 12/29/2020 08:55:00 AM