Paul Wenzel: A Man and His Goose 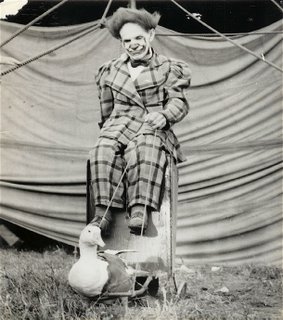 Whether working with live ones or skillfully made imitations, Paul Wenzel was a clown who enjoyed working with geese.

Several of his walk arounds gave the illusion of him being pulled around the track by geese, either by the use of fake legs, wagons, or dogsleds.

According to Bill Ballantine, Paul's favorite goose was his 1946-48 pet which he named "Anatole Prance".

129th Edition Red Unit Director of Clowning Robert Shields (of Shields and Yarnell) could only remember having ever seen one circus clown in his entire childhood. From his description of "a strange man walking with a duck" I always assumed he was referring to Wenzel.

I found this slide recently at a sale.
Here on Flickr.
Same guy, right?