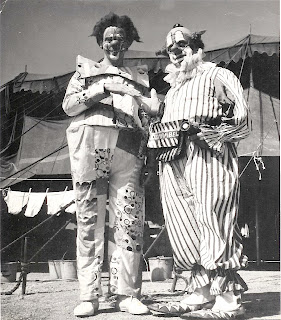 Harry Ritter and what looks to be Frank Cromwell in a photo taken on Ringling somewhere between 1947 and 1960.

I make that guess because the person who looks to be Frank Cromwell is dressed like Clarabell from the Howdy Doody show. I would have to guess that this was some kind of cross-promotion between the two shows. Clarabell's wearing a box around his waist telling us that he would prefer to be called "Dorabell" and he's got Clarabell's face painted on his shoes.

Isn't that just a dorabell?

My favorite part of the photo is the washline of BVDs in the background. Clean underwear always says "classy".

here else would you hang your clean underwear to dry. On the RBBB show no less.