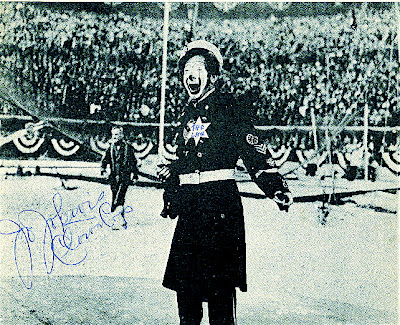 Joe Lewis, the famous cop clown, began performing in 1912 with Buffalo Bill Cody's Wild West Show as a rodeo clown at the age of 14. An enterprising youth, he used his earnings to purchase a mule and immediately used him in a comedy routine. In 1913 Joe and his trained mule act were hired by Miller Brothers 101 Ranch Wild West Show beginning a five year association with them. Joe then went the vaudeville route performing silly acts of mirth and playful mischief before donning makeup and running away with the circus in 1922.

Joe was a producing clown, but he was sought and most noted for working “come-in.” Before the days of Otto Griebling’s attention getting pie pans, Joe’s bellowing voice was heard no matter how large the coliseum. Like Otto, and countless after them, he pitted one side of the audience against the other in shouting and cheering matches.

Joe loved mingling with people, often assisting them to their seats. Sometimes he purposely seated people in the wrong seats and just left them there as a lark. When the rightful seat holders tried to claim their seats, he made a production of the situation, eventually hauling the patrons humorously, by the scruff of their neck, to their proper seats. Joe loved to strut about the hippodrome twirling his billy club, tweeting his whistle in an officious manner. More often than not, he would playfully whack people across the head with his sock filled billy club for the slightest provocation whether assumed or created.

Joe worked all the great circuses before joining Ringling Brothers. He was well liked and respected. Although he worked with all the great clowns over the years throughout America, his favorite and best friend was Emmett Kelly. Whether touring or sitting in their apartments during off season, they, with their wives, often wiled evenings away playing cards. Even after he married Emmett’s ex-wife, Eva, they remained friends.

Joe was a 33rd degree Mason and loved working Shrine Circuses as well as appearing at state and county fairs across America until he retired a few years before his death in 1961. Joe, arguably considered the best cop clown in circus history, was revered across the nation by law enforcement agencies. He loved playing the St. Louis Police Circus saying it was his favorite. They likewise loved him.

The most important possession of a clown is his trunk. Joe’s trunk contained his livelihood and mementos, not much different than any other clown. He had his costume and the usual assortment of makeup, powder and other accessories and props, but any further comparison stopped there. Joe’s trunk was a memorial, a testament to a nation that loved him. In the top tray, he had an assortment of authentic police badges. Fifty-nine officers from all walks of life gave him their badges as a means to pay homage to a great clown that put humor behind the badge.

Joey will have considerably more to say about his step-grandfather in his upcoming book, Emmett Kelly, “America’s Favorite Clown!” If you would like to own an autographed, first edition printing, replete with a generous amount of photographs and drawings, please reserve your numbered copy via joeykellydotcom@sbcglobal.net.

What a great story! I've been looking at a lot of Kelty Cast photos lately, & I do believe Joe was on every major circus there was.