I just found out that a good friend, a great clown, and a fellow fool passed away yesterday.

Steve began Mime training in the 60's and was a member of Claude Kipnis Mime troupe and also spent time training with Etienne Decroux. He was the founder of Mimewock, a 70's era mime troupe in Kansas City that produced a number of other great talents including Michael Lane Troutman, David Naster...

Performing as a silent mime/clown he performed his one-man show "Professor Effluvium's Poppycock Review" all over the Southeast. Steve also taught countless school children the art and joy of circus thru his teaching residencies in Circus Arts thru the South Carolina Artists In Education program.

Steve was a very old and dear friend of mine and one of the very early influences in my career and becoming a professional fool. He lived his life to the fullest and made many people, old and young, laugh in his lifetime. He leaves two beautiful children behind along with his ex wife, Sarah (who just happened to be one of our first booking agents). 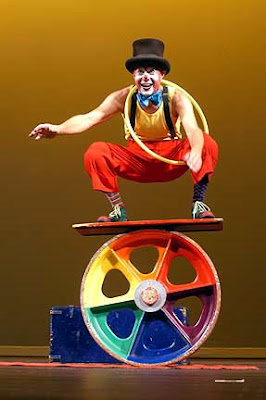 Here's a pic of Steve performing his signature rolla-bolla trick, using an old giant wooden flywheel from a steam engine for a roller instead of the standard PVC type roller. He is mid way thru passing his body thru the hoop. A classic routine that Steve performed with great flair.

I would love to see you recognize him on clownalley.net, if possible. There are many clowns out there who knew Steve and would like to know of his passing.

Thanks...
Best wishes for a safe and fun tour.
Sincerely,
S