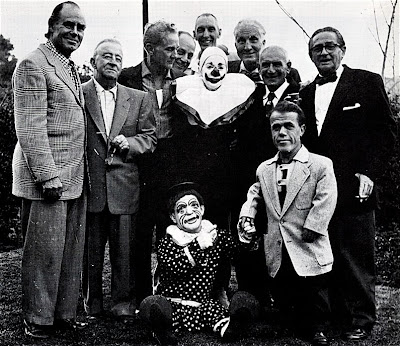 Sandy Weber sent this in response to the recent request for information on Everett Hart...

I found this photo in an old Clowns Of America magazine (1978) that I have.

It is a photo of several of the classic Ringling clowns out of make-up, one of which is listed as "Mr. Hart".

I am assuming it is probably Everett Hart (based on it
being dated from the 50's).

In front we have Frankie Saluto (seated) and Prince Paul Alpert.

I don't know who is in Paul Jung's make-up, but Paul has his arm around her so it could be his wife Elsie (this photo was from her personal collection).

I might have shared this before -- Frankie was a little jealous that Prince was shorter, so in every photo that Frank is with Prince, you'll notice Frankie will be kneeling or sitting so you can not compare them in height.