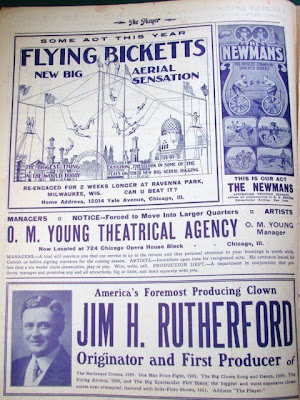 From the July 21, 1911 issue of The Player, a vaudeville trade magazine put out by The White Rats Actor's Union, comes an ad bought by Producing Clown extraordinaire, Jim Rutherford.

Mr. Rutherford created the Firehouse Gag, long a staple of the American three ring circus. This ad gives the origin of the gag as being 1911 on the Sells-Floto Circus and describes it as "The Biggest and Most Expensive Entree Ever Attempted".

Now if we just had a photograph of Mr. Rutherford in makeup...