ROBERT MCKIMSON: "He's a, I Say, He's a Great Director of the Animated Cartoonies!"

Yesterday, as a special treat for being the only kindergardener in his school to NOT ONLY take first grade reading BUT ALSO to have received his 16th consecutive perfect score on his spelling test, I introduced my son to one of my favorite things in the whole, wide world... Foghorn Leghorn.
For six years now he's heard me say things like "I say, I say, that's a joke son. You missed it!", "Get it through your bone head, boy!" and "He's a nice kid but he's about as sharp as a bowling ball!" and now he knows why.
To say that Foghorn Leghorn rocked his little kindergarden world would be a gross understatement...

Robert "Bob" McKimson, Sr.
(October 13, 1910—September 29, 1977)
Robert McKimson was an American animator, illustrator, and director best known for his work on the Looney Tunes and Merrie Melodies series of cartoons from Warner Bros.
McKimson was born in Denver, Colorado. After ten years of art education, he went to work for the Romer Grey Studio located in Alta Dena California, a would-be animation shop started by the son of Western author Zane Grey, and financed by Zane Grey's wife. Several cartoons were animated at the Romer Grey Studio, but none were ever released. Most never made it to camera.
From there he went to work for Walt Disney. He stayed with Disney's studio for two years before moving to that of Hugh Harman and Rudolf Ising. At that time, he had an accident that gave him a concussion. As a result, he was able to visualise better, thus increasing his production and animation.
In 1945, McKimson was promoted to director, replacing Frank Tashlin. In 1946 when Bob Clampett left McKimson (along with Warren Foster) Moved to Clampett's unit and Art Davis was given McKimson's old unit. He shared this position with Friz Freleng and Chuck Jones from 1949 until 1962, when several other animators had brief directorial stints just before the studio closed over a period from 1963-65. 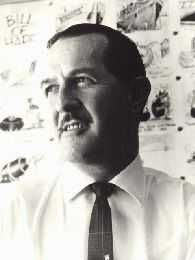 I would argue that The Hole Idea was McKimson's masterpiece. He animated and directed the entire thing just about single handedly.
Posted by Pat Cashin at 2/27/2009 08:40:00 AM