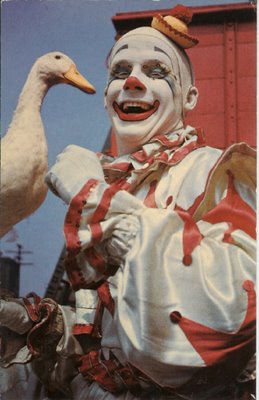 One place Harry Dann definetly DID work was the Ringling Bros. and Barnum & Bailey Circus...just NOT in 1973 when this postcard was being sold at the Circus World theme park in Haines City, FL.

(From the back of the postcard) "MASTER OF MIRTH AND MERRIMENT, Harry the Clown and his young friend Herman typify the wholesome amusement the Circus brings to the young and young at heart."

To that I say, "Well, sure. If a confirmed bachelor wearing makeup and holding a duck is your idea of wholesome then more power to you!" ; )

Photos from this session are STILL being used on shows around the world. Outside of Lou Jacobs, Harry Dann has posthumously promoted more shows he wasn't on than any other clown in history!

What a great site, how do you build such a cool site, its excellent.
»