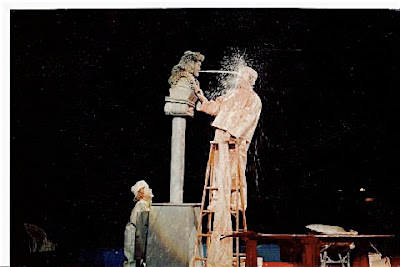 That's Greg De Santo on the ladder getting a face full of high pressure water. Nasty Thompson is seen working the water in the base of the statue during the 1988/89 Ringling Blue Show recreation of Mike "Coco" Polikov's painter's gag.

We did the painters gag (in the days before video reference, the only clips we had were about 30 seconds of poor 8 mm footage of Coco & Co.) in 1988-89, the year they saluted 20 years of Clown College. In addition we did the Firehouse, Dentist Chase, Clown Car, and Cable Car (borrowed by Keith Anderson from a South African Ice show bit). The clowns had four Ring Gags in 1 show!

Trolle Rodin(sp?) walked us though the bits of the paint gag. Trolle booked the show all through the 60's and 70's, so he knew Coco and the Britzios versions very well.

The version they had put together at Clown College wasn't working out, and Kenneth was very unhappy with it. Of course all they had to do was call the home office and have them send down the video of the 1969 TV special with the Britizo's doing it and we would have had no problems.

I do remember looking at the music charts that Bill Pruyne handed out to the band for the gag and you could see it read Coco's Paint Gag-1963 on the original papers.

The second year of that tour in Kentucky, Coco came out with his wife and I brought him back to the alley and he was very complementary of our salute to his signature routine.

Thanks for posting this picture...it brings back many great memories. Of all the routines I performed in the 10 years I toured with Ringling, this gag was always my favorite.

Greg, share with the folks the toll that the soap gag took on all of the gag's crew, as a result of the combination of daily multiple makeups and gallons of daily colgate shaving soap plastered "all over".

To this day when I run into someone who did this gag, I still smell the distinct aroma of colgate shaving soap.

We were without a doubt, the cleanest clowns on earth! Once you got over the stiffness of the rubber suits (made off copies of the ones Coco wore in his gag) and the damp rubber boots, and the 3 showers we took every Saturday, it was simply the most fun I had ever had in the ring. To hear the audience react to the buckets landing on our heads and the little people hurling headfirst into wheelbarrows of suds and knowning that we were continuing a tradition of material that has been done before us and continues to be done today was very gratifing. I was alwys amazed at clowns who wouldn't even consider doing these types of gags due to the work involved. I imagine there are easier ways to get laughs, but few create such strong memories with an audience.

I never saw Michael Coco work this sort of act live, although Sacha did a decorating routine in the first ever circus I saw live (Billy Smart's in 1957).
I saw The Brizios (that's the correct spelling!) several times with various personnel, but it always struck me that there was no story to the routine.
Besides which, would real painters wear rubber overalls? Granted it's far more practical to wear such costumes, but surely it's at the expense of reality.

I know the reason we wore them on Ringling was the ease of drying, they were hung dry. That and they said Coco wore them and they wanted to recreate the "look" as much as possible. They were uncomfortable and needed alot of repair. Mary Derosier, who recently celebrated her birthday on this site, did the construction of these costumes.

Now when I do a routine like this, I use regular overalls or jumpsuits and launder them between performances.

Instead of a rubber suit, couldn't the same be achieved nowadays with rip-stop nylon?

It air dries very quickly, so it's useful for both water AND soap gags.

When we did the Bakery Entree a few years later, we had the wardrobe made of the rip-stock nylon. the were much lighter to wear and dried quickly between shows.

It's so funny to see this topic discussed after all these years.
I remember going to the showers to clean up after the last show on a saturday back in 1988. Carefully ninja stepping over the super slick, sudsy floor i reached and turned one of the shower knobs.
As you remember, we all to share those showers usually in one large room. and so as 10 clowns in various stages of removing all that makeup stood minding their own business, I turned the shower knob on only to have the head of that shower, rocket off the pipe and hit me square in the chest with such force it propelled me flat on my back into the spiraling pinkish pool of soap. paint, and shaving cream.
I looked up to see 10 half painted, naked clowns staring directly at me followed by a laughter that echoed from the arena, thru out the little blue bus and from one end of the train to the other. I soon found my footing with the help of some kind anonymous clown and chose another shower knob, quickly rinsing off the funk.
I remember that day so well . I still have an aversion to colgate and clown white. Does anyone remember that?