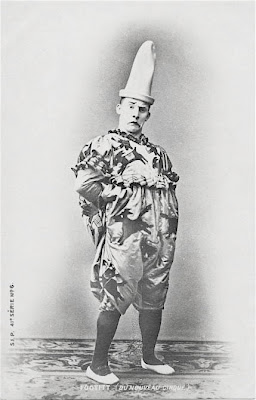 From Who's Who in Victorian Cinema:

(1864-1921)
George Footit
Clown
English clown Footit trained as an equestrian acrobat with his father's circus and, by 1880, his appearances with Sanger's Circus established him as a leading horseback clown. His partnership with Cuban Raphaël Padilla, known as Chocolat (1868-1917), began at the Cirque Médrano in 1886, flourishing throughout the 1890s and early 1900s at the most fashionable Parisian circus, the Noveau Cirque. Their slapstick antics, in which Chocolat was the perenial victim of the violent, but impassive Footit, were popular with all levels of society, attracting the attention of many intellectuals and artists.
A Photoscenograph film of their sketch William Tell provided the basis for a painted picture band projected at Emile Reynaud's Théâtre Optique in August 1896, while their act was also filmed by the Lumière Cinématographe and for the Phono-Cinéma-Théâtre in 1900.
Following the break up of the partnership in the 1900s Footit appeared on the stage and for a brief time ran his own circus.

George is buried in the Pere Lachaise cemetery in Paris, his grave being quite near to that of Oscar Wilde. I paid a visit to it 2 or 3 years ago in oredr to pay my respects to a fellow Briton, and the grave was in good condition, I'm pleased to say.