Photo courtesy of Michael Rainwater from the archives of Ms. Janette Rainwater 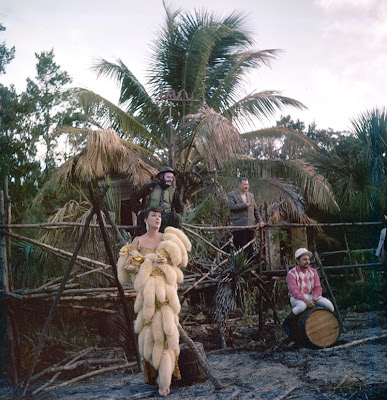 I have been going through some more of my mother’s (Janette Rainwater) slides from the ‘50s, and came across two that were taken on the set of “Wind Across the Everglades” that was filmed in 1955 (but not released until 1959). These were taken on location in Everglades City, FL. Emmett Kelly (as Bigamy Bob) and Gypsy Rose Lee are featured, but I cannot identify any of the others. I hope that you can use them.

Emmett Kelly as Weary Willie as "Bygamy Bob"??? BYGAMY BOB?!? What happened to Emmett's strong feelings about not having his beloved circus character appear in a negative light, as with his whiteface appearance in The Fat Man???
Post-Ringling and post-Brooklyn Dodgers did he really need the money that badly? Is this what lead to the split with Leonard Green? Or was the lure of working with Miss Gypsy Rose Lee just too much?

you mean you missed that episode??