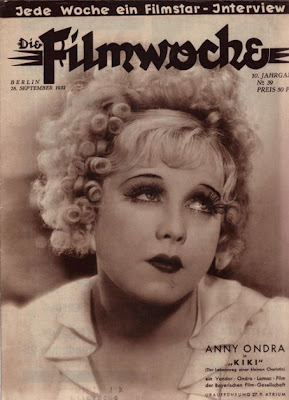 From Wikipedia...
Anny Ondra
Anna Sophie Ondráková, known as Anny Ondra (May 15, 1903, Tarnów, Galicia, Austria–Hungary, now Poland – February 28, 1987, Hollenstedt near Harburg, Germany) was a Czech film actress.
As the daughter of a k.u.k. officer, she spent her childhood in Prague. She starred in Czech, Austrian and German comedies in the 1920s, but can also be seen in some British dramas, most notably in Alfred Hitchcock's The Manxman and Blackmail (both 1929). However, when Blackmail was reshot with sound, Ondra's thick accent was considered unacceptable, so her dialogue was recorded by actress Joan Barry. Ondra made some forty more films in the sound era before retiring in the late-1930s.
She had a production company with her first husband, director Carl Lamac. Lamac had directed her in several silent films and also acted with her in films directed by other filmmakers. They worked together, even after their divorce. On July 6, 1933, she married the boxer Max Schmeling, with whom she appeared with in the film Knock-out (1935). The happy marriage lasted until her death in 1987. They have no children.
She was portrayed by Britt Ekland in the television movie Ring of Passion (1978), where the character was named "Amy Ondra Schleming." She was also portrayed by Peta Wilson in another television movie Joe and Max (2002).
Ondra was buried in the Saint Andreas Friedhof cemetery in Hollenstedt, Germany. Her husband Schmeling, who didn't remarry after her death, died in 2005 and is buried next to her.