Both shows in Athens yesterday were sellouts and we couldn't have asked for a bigger sendoff for the Norths. If they had to go, last night was the one to go out on!

Between swows we took a few photos to teach Wade Burck a little something about 21st Century Circus Boss Headgear...

You see, John Ringling North II wears this hat. Here he is surrounded by a bevy of beauties knows as the North Stars.. 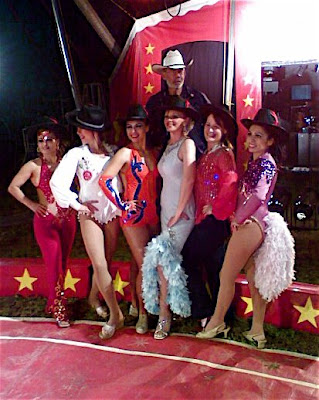 I don't know what he'd be surrounded by if he bought himself the Stetson "Open Road" that Wade insists he requires to be taken seriously, but I'd like to see a photo of the type of ladies up there at the Cuneo barn who are attracted to Wade's Flying J trucker cap.

Around here only one guy wears the "Open Road" and that's the clown... 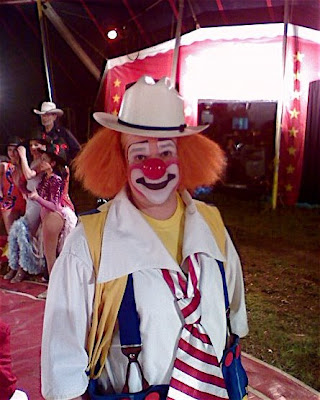 And I didn't buy mine because of Art Concello, Hoxie Tucker, Sophie Tucker or any circus boss. I bought mine because "The Great One" wore the "Open Road" when he played Sheriff Buford T. Justice of Texas! 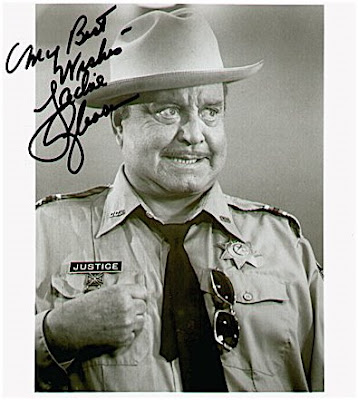 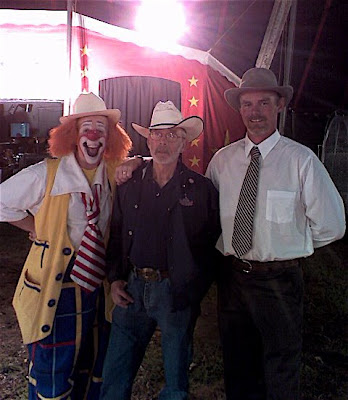 Casey McCoy is trying out the Jim Royal look. Cetainly, a bit of brown nosing can't hurt. New show, new season, gotta do what you gotta do.

Ben,
Casey looks like a shyster horse trader, with a smile on his face, because he just talked the European rich guy, with the stunned look on his face, into buying a 3 million dollar cutting horse,and all along the money man thought he was at a rodeo because there was a clown there.
Wade Burck

Pat,
I said Charly 1 Horse, and you thought I said, Stetson Open Road? Get the orange hair out of your ears.
Every chain gang guard from Arkansas to Louisiana wears one which should have been a tip off, that and the cheap price, that they are not manufactured for style. And we can see that by the picture, even with the Yak hair hanging out underneath. Just because Huey Long was tapping the stripper Blaze it had nothing to do with the open road stetson he was wearing, you clown. If you can get 20.00 for it, take it. That way you get a good deal, and somebody else get screwed.
Wade Burck

Casey,
A female wild animal trainer I knew told me it is important to get your pick in at the start of the season. I'll send you my choice this afternoon. I have a CDL so I don't need a driver.
Be safe,
Wade Burck

You must be out of your cotton-pickin' mind.

There isn't a single, solitary hat made by the Charlie 1 Horse people that you could wear unless you were...

A) A truck stop hooker

C) The cowboy from The Village People


Seeing as how Rob Zeiser and I will be working a big show headlined by the Village People April 12 in Staten Island, I'll be able to ask Mr. Buckaroo just what hat he wears for you.

Now who do I talk to about getting that Bobby Goldsboro/Linda McCartney haircut of yours? What are the rest of The Raspberries doing nowadays?

...and how DARE you malign the hat worn by Sheriff Buford T. Justice???

What we have here is a lack of respect fo' da law.

Danny Boy,
What I am wearing is not a replica of the managers wardrobe. If fact this is standard issue "backing up the dog act" wardrobe. Take a hint though Dan, I learned long ago from a couple of "real" agents, this will work for booking towns/ with sponsors, that will get crowds. I am sure your t-shirt and faded rustlers work fantastic on those lot and lease deals, where the show pays some un-godly amount of money for the privilege of showing a blank for a couple days. Some of us are striving to reach a higher level, the rest eat with the Carp. Good Luck my friend.....

Addendum to Dan,
As far as the brown nosing comment....
The difference between brown noser and S*$# head,,,,is just depth perception.

Hows your sight around Tommy Liebel these days Dan???

Pat,
The good Charly 1 Horses are not bought of the shelf. They will make you what ever you want, how ever you want it, for the paltry starting fee of 1200.00. Increasing in price as you select "add ons". Then they are unique one of a kind, similar to a good clowns make up. But what you know about a good clowns makeupLOL

Casey,
Yeah!!!!! Now you are getting the hang of it. Once you understand the difference between an air breather on the surface, like dolphins and whales, and the bottom dwellers, like carp and catfish, it's easier to "bait a hook right". Be safe both of you Pals.
Regards,
Wade Burck

Casey, a death in the family has brought me home. However, I will say that 3 weeks in Davenport with Tommy, Nosey, midgets, etc. has changes the way I look at that man forever.

have you hired a groom yet?