Some some controversy has arisen as to the identity of the tramp clown in yesterday's Circus World photo from Billy Vaughn. Kenny Ahern, quite respectfully, contends that it is not Bill Hamilton as identified by Mr. Vaughn.

As I was not there (and have no idea how Mr. Hamilton's makeup may or may not have evolved), I will leave it to those that were to properly identify those that were... 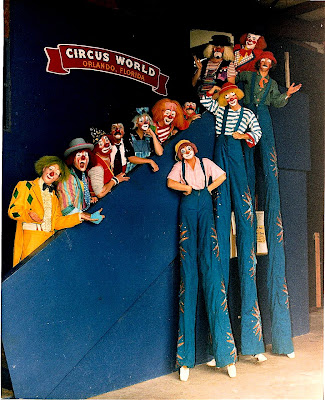 Here is a photo of the 1984 Circus World Clown Alley 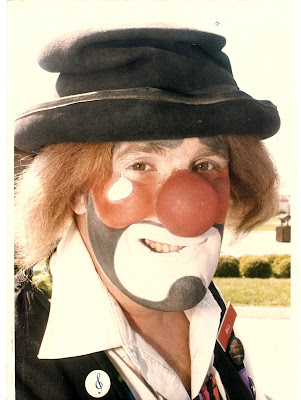 I am sure Kenny is right. I worked at
CW for a short while again in 1982 and remember Mr. Haamilton was boss clown then. Sorry for the mistake, my memory isn't what it used to be.

I believe the Clown on the tall stilts is Mike Key. I am not sure what wave of Clown College graduates came from, but his clown grew into something that I admired. To the surprise of his friends and his X wife Kristine he was an accomplished equestrian and became Sir Mike Key one of the Nights Medieval Times.

I dare say the tramp clown is indeed Bill Hamilton.
Bill was my very first Boss Clown. I was in the Alley at Circus World for the 3 months right after I graduated high school and I left when I was accepted to the RBBB Clown College class of 1985.
We lost Bill faaaaaaar too early...
"Toto" Johnson

"CW" was Joe Freeman...although by the time I worked with him he was no longer "CW" and was back to his RBBB Clown College makeup.
"Toto"

The Tramp Clown is indeed Bill Hamilton. I should know I am the seventh clown up from the bottom of the stairs to the top in the photo. I was a good friend of Bills when we both worked at six flags great adventue in 1979 & 1980. Bill was great clown and a good friend my heart goes out to his wife mary

Yup. It's Bill. I was standing right next to him. RIP.
Joe the Clown, CW, whatever you want to call me....

"The Love Clown is right! It's Bill.
Joe "CW" "The Clown" Freeman
RIP Bill! You were a great Boss Clown!

Little John's last name is Seitz. He was (and maybe still is) married to Terry who was a clown with the RBBB show at some point. She was assistant boss clown before I started working there in 1984. There were many more clowns missing from this picture including myself. That's definitely Boss Bill Hamilton.

this is bill hamilton, worked w/him for years in nj then in circus world for a short time...recently found out he has passed on and was looking for pic...thank you.